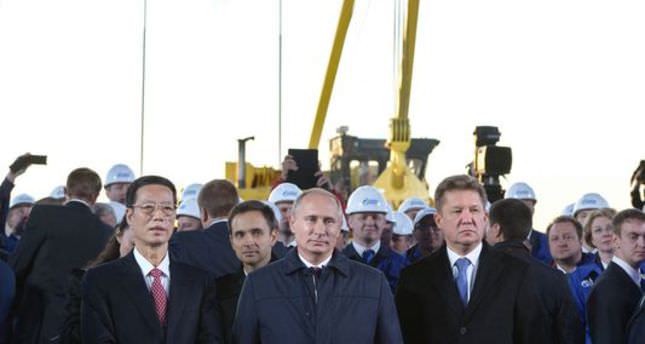 Russian President Putin launched what is hailed as 'the biggest construction project in the world' in Eastern Siberia. The 4,000-kilometer 'Power of Siberia' pipeline will supply China with natural gas

Russia aims to boost its economic ties with China, particularly in the energy sector, in the face of Western sanctions over Ukraine, but this could prove a high-risk strategy. On Monday, far from the fighting in Ukraine and the threat of fresh Western sanctions, President Vladimir Putin launched what is hailed as "the biggest construction project in the world" in Eastern Siberia. The 4,000-kilometer (2,500-mile) "Power of Siberia" pipeline will connect Yakutia's gas fields with the Sea of Japan (East Sea) and also with the Chinese border. From 2018, the Power of Siberia will for the first time allow Moscow to supply China with natural gas through a pipeline under a contract worth $400 billion (TL 864.2 billion) over 30 years. Ending 10 years of difficult negotiations with Beijing, the signing of the contract in May was a major success for Putin, whose annexation of Ukraine's Crimea peninsula and support for other Ukrainian separatist movements have led to the worst East-West standoff since the Cold War.

At loggerheads with the West, Moscow is seeking to refocus its gas and oil exports from Europe - its main energy market - towards Asia and is diligently building an energy alliance with Beijing. The shift suits China, which needs additional energy supplies to cover its growing domestic consumption. urope, shaken by the recent gas dispute between Moscow and Kiev, has also redoubled its resolve to reduce dependence on Russian fossil fuels. Russian gas giant Gazprom's Chinese contract will "provide a launch pad for the company's full-scale diversification into the Asia-Pacific region at a time when it is facing sales pressure in Europe," the Russian branch of Moody's Investors Service noted this week in a report.

But Moody's also warned of "challenges" to the eastward turn, "as China's ability to put pressure on prices and the sheer scale of the required investments could weigh on the future profitability of Russia's oil and gas sector." The value of the Russia-China gas contract is being kept confidential, but according to some leaks it was below Gazprom's expectations, while the required investments amount to tens of billions of dollars. Russia has been more successful in carving out a niche in Asia's oil market - thanks to a mega contract that the Russian state oil company, Rosneft, signed in 2013 with Beijing. In mid-August the Wall Street Journal estimated that a record 30 percent of Russian oil exports had gone to Asia since the beginning of the year. Russian Energy Minister Alexander Novak said this week that its oil exports to Asia could eventually double, adding that

Moscow was in talks with Asian companies willing to invest in liquefied natural gas (LNG) projects in Russia's Far East.The China National Petroleum Corporation (CNPC) is expanding its Russia presence; it holds 20 percent in an LNG project planned for the Arctic Yamal peninsula by Russia's Novatek Group and France's Total and is working with Rosneft on oil deposits in East Siberia. This week Putin offered China a stake in the huge Vankor oil field -considered one of the most valuable in east Siberia. "If concluded, this deal would represent a major change," the Eurasia Group consulting firm said in a report on Wednesday. "Rosneft's decision to offer China a stake in the mega Vankor oil field in East Siberia signals that Moscow's bargaining position has been further weakened by (Western) sanctions and that it needs the capital infusion."

The United States sanctions hit Rosneft hard, forcing the company led by Putin's close ally Igor Sechin to request a bailout from the state to pay off a debt that exceeds $30 billion, while Brussels restricted Russia's access to some technology aimed at the energy industry. Russia's oil production - with hydrocarbons the main source of state revenues - is running out of steam at the moment and projects needed to revive it require huge investment. As a result, Moscow has little choice but to boost cooperation with China. But "what Kremlin presents as a strategic partnership is simply a means for China to diversify its supplies," forcing Russia to accept Beijing's terms, Russia's Vedomosti business daily wrote this week.