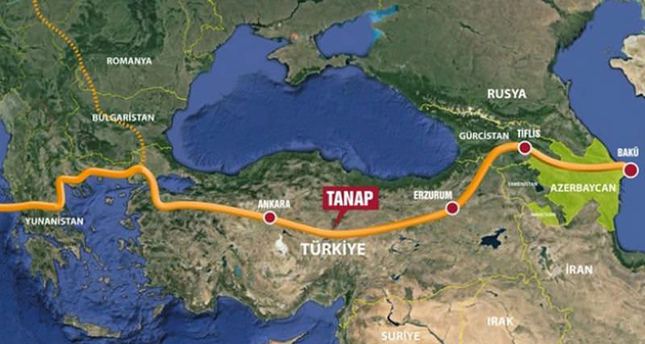 by Daily Sabah with AA Sep 19, 2014 12:00 am
Turkey's Prime Minister Ahmet Davutoğlu and Turkey's Energy Minister Taner Yildiz will participate in a ceremony on Sept. 20 in Baku, Azerbaijan, to mark the launch of construction on the South Caucasus Pipeline (SCP), Turkish government sources have announced. The SCP is the first phase of the Southern Gas Corridor, which will carry gas from the Azerbaijan sector of the Caspian Sea to Turkey. The pipeline will connect to the Trans
Anatolia Natural Gas Pipeline (TANAP) via Georgia and reach Europe.

TANAP is intended to transport natural gas from the Shah Sea 2 and other fields in Azerbaijan - and possibly from other neighboring countries - through Turkey to Europe. The initial capacity of the Southern Gas Corridor is planned to be 16 billion cubic meters of natural gas.