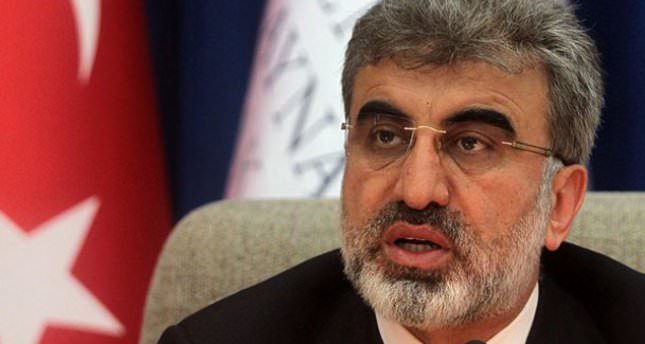 Turkey will use necessary measures to prevent oil smuggling across its borders and aims to improve ties with Iraqi government, the minister said

Energy Minister Taner Yıldız, speaking at an interview on Friday dismissed the allegations that Turkey is ignoring ISIS's oil trade along Turkey's borders. Yıldız also noted that both Turkish and Iraqi authorities are willing to improve their current relations in accordance with the mutual interests of the countries. Yıldız stated that, especially in countries that are politically unstable, energy resources have become more important, making places like Northern Iraq and Syria especially hot areas.

The Islamic State of Iraq and al Sham (ISIS) has seized some oil wells and small-scale oil refineries in the region, some of which have been bombed by the U.S. Yıldız said that this was due to terrorists taking advantage of political instability and not due to any shortsightedness by Turkey. "Turkey is a constitutional state and would not be involved in any illegal transactions. There is no trade relationship other than the provisions of the Iraqi constitution that are binding us to our agreements with Baghdad and Northern Iraq," said Yıldız.

Yıldız also stated that crude oil smuggling has always been a problem, even before ISIS and it has always been illegal. Emphasizing the fact that Turkey is fighting to end smuggling and that the Ministry of Customs and Trade have taken concrete steps in this respect, Yıldız said, "ISIS cannot sell the oil it smuggles through or in Turkey. We have an energy trade capacity of $60 billion [TL 135.78 billion] and we always examine the origins of the crude oil we receive from the Kirkuk-Yumurtalık crude oil pipeline. The wells, the amount they produce and how it was delivered to Turkey are recorded." Regarding the relations with the new government formed in Iraq, Yıldız said that it is considered a neighbor and sister country and the current state of Iraq is not sustainable. Yıldız further noted that the governments of both countries are striving hard to build a mutually beneficial relationship.

After a meeting with Iraq's Minister of Electricity Kasım Fehdavi on Thursday, Yıldız stated, "We will hold a signing ceremony regarding the installation of a 3,000 megawatt plant that has been purchased by the private sector in the south of Baghdad. This is a joint project which is critically important for Turkey and the normalization of Iraq." Yıldız stated that in the last 12 years, almost the entirety of Iraq's energy structures have been destroyed, continuing, "At the moment, energy cuts are more common than energy supplies in Baghdad. It is sometimes cut for up to 18 hours a day. So far, Turkish companies have successfully carried out undertakings in Iraq. One of our companies completed a power plant producing around 2,000 megawatts of electricity in less than three years and put it into operation. This success is appreciated by the Baghdad administration. Now, a Turkish company has undertaken the construction of a power plant with a 3,000 megawatt capacity, which corresponds to an investment of $4.5 billion."

In response to a question as to whether the daily capacity of the Kirkuk-Ceyhan oil pipeline would be increased in order to transport more Iraqi oil through Turkey, Yıldız said that this pipeline has a greater capacity than the Baku-Tbilisi-Ceyhan pipeline. Underscoring the current 70 million ton-capacity of the Kirkuk-Yumurtalık oil pipeline, Yıldız said that Iraq can make a $50 billion turnover from the aforementioned pipeline. "However, our Iraqi brother is not capable of using this capacity at the moment. The Turkish side, however, is able to use the whole capacity," Yıldız noted.

In answer to a question, the minister remarked that there has been no degradation in relations with Kurdistan Regional Government (KRG). Emphasizing that trade deals signed by both Turkish state-run and private companies with the KRG are paving the way for normal relations with Iraq, Yıldız highlighted that Turkey will continue to support both Irbil and Baghdad in order to boost cooperation that will lead peace and wealth in Iraq.