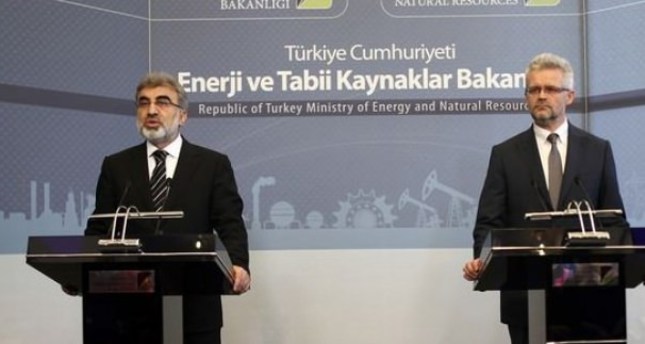 The surging US dollar has caused energy-hungry Turkey’s natural gas and electricity generation costs on the international market to ascend, which is also expected to increase inflation in the country

Turkey will hike electricity and natural gas prices by 9 percent from October, Energy Minister Taner Yıldız said on Tuesday, blaming a weaker currency for the price hikes in the heavily import-dependent country. Despite the hike in prices, Turkey offers the lowest natural gas price across Europe, the minister remarked. The hikes are expected to add 0.6-0.7 percentage points to inflation, analysts said. Inflation reached 9.54 percent in August; double the central bank's 5 percent year-end target. Addressing the facts that energy costs soared excessively and that the U.S. dollar now buys TL 2.28, Yıldız noted that the dollar upsurge is a major setback for the energy sector.

Yıldız added that Turkey has not applied any price increase for the last 24 months, continuing, "We are trying to compensate for incremental costs with domestic resources. This year, however, the irregularity of the water regime and low rainfall has pushed us to a point where we have difficulty in balancing them. As of next month, including November and December, we will increase electricity and natural gas prices by 9 percent."

"Despite price escalation of 9 percent in natural gas, Turkey still offers the cheapest natural gas for industrial and househould usage among European countries. The country also ranked fourth among the EU countries in terms of cheapness of electricity in housing and the cheapest one in industrial electricity," the minister said.

Yıldız also stated, "We could not generate electricity with hydroelectric power plants due to low rainfall, which cost us more than TL 3 billion. The proportion of water resources that are used to produce electricity in Turkey shrank to 17-18 percent from 25 percent. This is expected to rise to 19 percent by the end of the year. We fill this gap with imports and other resources."

Stating that the three-month price hike has affected electricity and natural gas as well, Yıldız continued, "Although we regulate natural gas every month and electricity every three months, today's dollar parity has deeply affected us. Even though one barrel of crude oil in June 2013 was almost the same as today, the exchange parity has considerably differed. Then, the exchange rate of the dollar was TL 1.92, but it now hovers around TL 2.28. This gap is too large to be bridged even with this cost increase we launched. But we are trying to balance it with domestic resources as much as possible in favor of our people and industrialists."

"We predict that we will import less natural gas [valued at $1 billion] next year thanks the contribution of power plants. We should focus more on energy saving and efficiency. Objections against the usage of domestic resources should be revised," he added.

Speaking to Daily Sabah, veteran economist Hikmet Baydar noted that the latest increase in natural gas prices stemming from the high dollar currency will cause an inflationary effect in Turkey. "Global financiers view the U.S. market and dollar as the least risky investment instrument, which has led the U.S. dollar to surge sharply against the euro and currencies of developing countries. According to my view, U.S. markets are as vulnerable as any other developed or developing countries' markets. There is 'perception management' going on," Baydar said.

Baydar further stated that the Turkish central bank would not revise its year-end inflation target unless it observes a considerable fluctuation in the market due to the latest price hike.

"We had not foreseen a change in the natural gas and electricity prices when making our 8.4 percent forecast for year-end inflation. After today's announcement, we are revising our forecast to 9.1 percent," said Ali Çakıroğlu, strategist at HSBC in Istanbul.

Much of Turkey's electricity is generated using natural gas, meaning the price rise is likely to have a significant impact on household energy bills. Turkey, the ninth largest natural gas importer-importing 45 billion cubic meters per annum-in the world purchased 58 percent of its total imports from Russia. Iran (19 percent) and Azerbaijan (9 percent) ranked after Russia in 2013. The rest was supplied as liquefied natural gas from Algeria and Nigeria. Natural gas consumption in organized industrial zones reached 3 billion cubic meters last year, meaning 11.5 billion out of some 47 billion cubic meters of natural gas that was consumed in Turkey was directly used in industry. According to data disclosed by the Energy Market Regulatory Authority (EPDK), 20.78 percent of last year's natural gas consumption was used in housing while 45.85 and 25.11 percent of it was used in electricity generation and industry respectively.