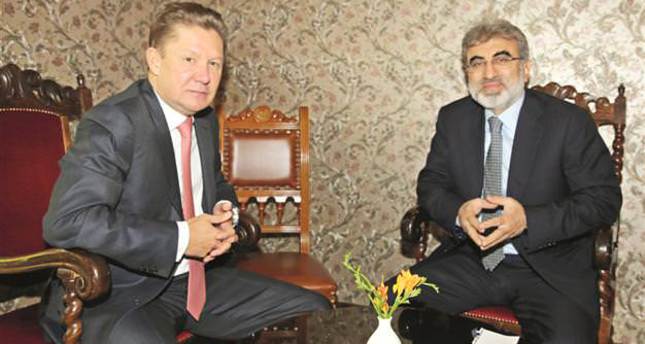 by Daily Sabah with Agencies Oct 02, 2014 12:00 am
Trade in natural gas and the planned construction of the nuclear reactor in Mersin province were discussed during Energy Minister Taner Yıldız's visit to Moscow yesterday. Yıldız met his Russian counterpart Alexander Novak, Gazprom's CEO Alexey Miller, Sergey Kiriyenko, CEO of the state-owned Russian nuclear company Rosatom and Elena Burmistrova, the head of Gazpromexport, during his visit to the Russian capital. After the meetings parties agreed on increasing the amount of natural gas flowing through the Blue Stream pipeline. As Russia's second-biggest client for its natural gas after Germany, Turkey imports 25.5 billion cubic meters (cbm) of Russian natural gas annually via the Blue Stream pipeline and West Line, which carry Russian gas via a pipeline from Ukraine to Turkey.

However, the recent crisis in Ukraine has raised concerns that Kiev could halt the gas flowing through West Line.

Yıldız announced in August that Turkey was carrying out discussions with Gazprom in order to increase the yearly capacity of Blue Stream by 3 billion cubic meters, which connects to Turkey directly from Russia. Yıldız also discussed the $20 billion (TL 45.63 billion) Akkuyu Nuclear Power Plant project, where $3.5 billion worth of construction equipment is also expected to be used, $1.8 billion of which will be spent this year alone.

Funds received from Russia are expected to be used in the building of the infrastructure required for the plant including the construction of roads, power lines, water pipelines, temporary housing and cranes. If the project license is approved, the reactor construction is estimated to begin in 2016 and become operational by 2020, with the entire plant being fully operational by 2023. Rosatom signed an agreement in 2011 to build and operate the four-reactor nuclear power plant on Turkey's Mediterranean coast with the aim of having the plant fully-operational by the Turkish Republic's 100-year anniversary in 2023.

Russian energy giant Gazprom and Turkey have agreed to increase the capacity of the Blue Stream natural gas pipeline, which carries Russian gas to Turkey via the Black Sea. Turkish government sources confirmed with Anadolu Agency on Wednesday that the agreement to increase capacity from 16 billion cubic meters (bcm) to 19 bcm had been reached during Turkish Energy Minister Taner Yıldız's visit to Moscow.

Turkey consumes 45 billion cubic meters of gas annually, with nearly 60 percent of it being imported from Russia. The agreement came as Yıldız held discussions with Russian counterpart Alexander Novak, Gazprom's CEO Alexey Miller, Sergey Kiriyenko, CEO of the state-owned Russian nuclear company Rosatom and Elena Burmistrova, the head of Gazpromexport, during his visit to the Russian capital. Gazprom also reiterated that it had agreed with Turkey to increase the capacity of the Blue Stream underwater gas pipeline to 19 billion cubic metres (bcm) from 16 bcm.

Turkish demand for gas has more than tripled since 2000 to almost 47 billion cubic metres, with further increases expected as both its economy and population grow. The country's total energy bill stands at around $60 billion annually. Turkey has asked Gazprom for gas price cuts however, it was not immediately clear if the Russian company had agreed to any concessions.