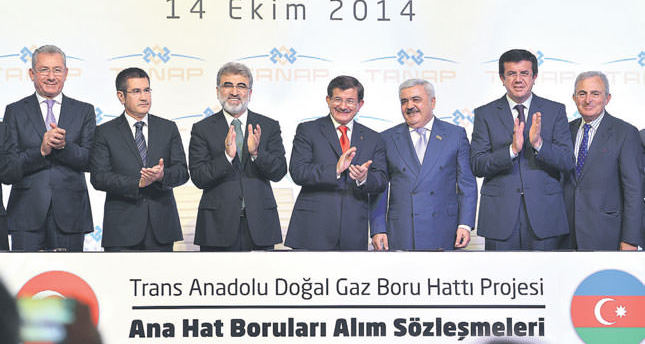 TANAP, which the Turkish state holds a 30 percent stake in, is the Turkish leg of a pipeline project with an investment projection of $45 billion (TL 102.33 billion) that will go through Azerbaijan, Georgia, Turkey and Greece, to end in Italy. The tender process for TANAP's main pipeline started on Feb. 14, 2014 with invitations sent to 18 pre-qualified local and foreign companies and bids received on April 14, 2014. The construction works for the project will be distributed through another tender and 6 billion cubic meters of gas is expected to enter into Turkey in 2018 with the first delivery to Europe scheduled for 2019.

Speaking at the signing ceremony, Davutoğlu stated that the 21st century will be the century of energy and Turkey has taken steps to ensure that this century will be a peaceful century in terms of energy. "Instead of competing for energy resources, we are determined to establish energy partnerships," said Davutoğlu and added, "Instead of wars and clashes or peace and compromises for the increase and decrease of oil and natural gas prices, we value petrol and natural gas as a common good; a tool not for competing or for strategic conflict of interests but for cooperation. The Caucasia and Balkans that were the areas in crisis in the 90s are now establishing a bridge of peace over Anatolia, where the two geographies meet."

16 billion cubic meters will be delivered in the first phase of the project and by 2020 this figure will increase to 22 billion, 24 billion in 2023 and later 33 billion cubic meters of gas will be delivered through TANAP; thus making it strategically important for covering the demand of both the region and Europe. Davutoğlu noted that the Southern Gas Corridor will provide new opportunities for both diversifying energy supply and also as a result of its energy geopolitics - geo-economics.

Minister Yıldız stated that the project TANAP is included in has four main parts; the first being the pipeline carrying the gas produced in the Caspian region to the border of Georgia; the second is the pipeline coming from Georgia, the third is TANAP between Turkey and Greece and the fourth part is the pipeline between Greece and Italy. Yıldız noted that Turkey will complete this pipeline in 4 years and an expropriation process of the pipeline is still continuing. The Environmental Impact Assessment will also be completed and various engineers, technicians and workers in 21 cities in Turkey will carry out the project.

Tosçelik Profil undertakes the lion's share with almost 50 percent of the project from 80 percent of the share of Turkish companies, which corresponds to over $600 million. Speaking to Daily Sabah, Chairman of the Board of Tosçelik Profil Fuat Tosyalı said, "As Toscelik, we calculated carefully to make this project less costly. We work to contribute to Turkey's competitive capacity and production power. We use our own raw materials and we are the global steelmakers of Turkey. We believe we earned something we deserved."

While the total amount of the agreement has not been announced, according to the statement of Borusan Mannesmann published at the Public Disclosure Platform, while Borusan Mannesmann's share is $140 million, the value of the steel pipe tender won by a consortium of Borusan and other companies is $420 million.

SOCAR's president Abdullayev also took the stage at the ceremony. "With TANAP, Turkey will have the chance to become an energy corridor between the East and the West, its mainstream position will become stronger, tax income, transport and portfolio income will increase, 15,000 to 20,000 job opportunities will be creased and the Turkish pipeline production and pipeline construction sector will develop and many more tenders can be assumed with the reference of TANAP," said Abdullayev.