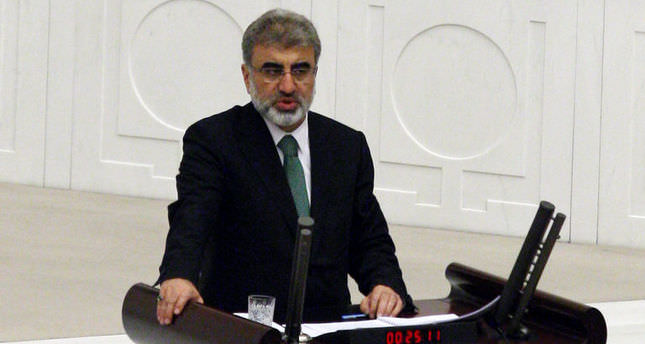 by Daily Sabah Oct 22, 2014 12:00 am
During a televised interview on NTV, Energy and Natural Resources Minister Taner Yıldız answered questions regarding the possible troubles of Turkey's natural gas supply, the effect of falling oil prices and the impact of the Islamic State of Iraq and al-Sham (ISIS) on Turkey's energy projects.

Yıldız also states that the decrease in water resources has contributed adversely to the energy shortage and underlined the necessity to increase alternative energy resources. He said, "We should not object to everything. The largest amount of natural gas will come from Ukraine."

In response to a question as to whether there will be a reduction in natural gas prices, Yıldız stated that natural gas prices in Turkey are indexed to the per barrel price of crude oil which is reflected in the past prices of the six to nine months . "Despite the latest price regulations, we are selling it for a price that is lower than we buy. Thus, BOTAŞ [Petroleum Pipeline Corporation] makes a loss of around TL 2 billion [$892 million]. We are already losing. Every reduction we receive will be used to make up for this loss. We are right in demanding a reduction, but we will see how much this reduction will be," he added.

Yıldız also emphasized that neither Turkey, nor the Justice and Development Party (AKParty) government have plans of privatizing boron operations, stressing that they will remain under the supervision of the public.

Mentioning falling oil prices, Yıldız said that it has positive reflections on Turkey. "Oil prices have seen three reductions in a row. However, we see that oil prices have not dropped in the world, despite a 25 percent decline in the price of per barrel crude oil. If this fall continues for a year, our budgetary burden will be eased by 10 percent. I said that this was speculative when the price per barrel of oil hovered above $110 [TL 246.51]. We can say that the current price of oil, which hovers around $85-86, is positive for Turkey."

Yıldız underscored that ISIS is an actor that has dramatically changed the dynamics in Northern Iraq. Answering a question of how the close energy cooperation that Turkey has established with the Kurdistan Regional Government (KRG) would be affected by these developments, Yıldız said, "ISIS has become an important factor that does not only threaten the stability of the KRG but also the entirety of Iraq. The recent situation in the region has affected our energy projects. ISIS poses troubles in terms of energy. We are trying to maintain deliveries. We are ready to deliver seven-times the amount of the currently delivered oil."