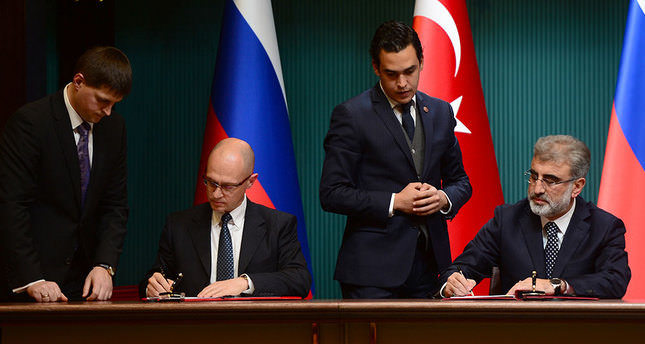 Turkey's counter-offer to Russia for a natural gas discount has not been finalized yet, the Turkish energy minister said on Tuesday.

"Russia's discount offer is a positive step towards strengthening our collaboration, yet we hope to receive a higher discount," Taner Yıldız, Turkey's Minister of Energy and Natural Resources, told journalists during a press conference in Ankara.

Speaking at a joint press conference with Erdoğan on Monday, Putin had said Russia would reduce the gas price for Turkey by 6 percent, starting next year, and had agreed to supply Turkey with an additional 3 billion cubic meters. Last year, 13.7 bcm of gas were pumped to Turkey via Blue Stream.

It is too early now to reflect Russia's discount offer to Turkish natural gas consumers, Turkey's Energy Minister told the press on Tuesday. He said Turkey's oil and gas pipeline distribution company BOTAŞ still conducts the negotiations over its losses, not profits.

Russia is also thinking of scrapping the South Stream natural gas pipeline project and may cooperate with Turkey on building a gas hub for southern Europe, according to the President Vladimir Putin.

Putin said Russia can't implement the project because of the European Union's opposition to it. The $40 billion Gazprom-led project would have involved running a pipeline under the Black Sea to Bulgaria and further on to southern Europe.

"We will not start the construction of the project on Black Sea. It is not logical to construct all the pipeline and stop when reaching the border of Bulgaria," Putin said on Monday.

The CEO of Russia's gas monopoly Gazprom, Alexei Miller, said that the project to build the South Stream gas pipeline was dead, after Putin cited obstacles raised by the European Union.

"The project is closed. This is it," Miller told the reporters.

However, Moscow will boost gas supplies to Turkey and may cooperate with it in creating a hub for natural gas supplies on the border with Greece, according to Putin.

The Russian president met his Turkish counterpart Recep Tayyip Erdoğan amid differences over the crises in Syria and Ukraine. The two leaders focused on their countries' booming economic and trade ties. The Russian leader arrived in Turkey on Monday accompanied by a large delegation, including 10 ministers.