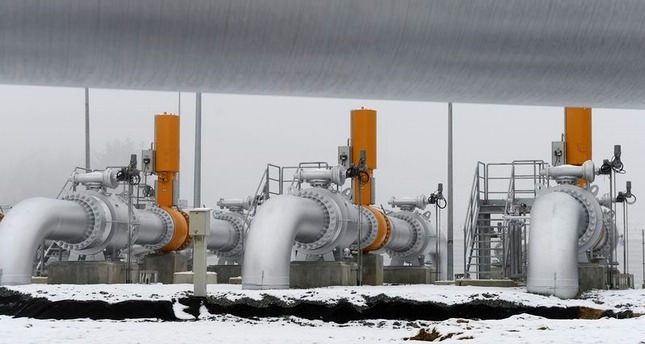 by AA Dec 04, 2014 12:00 am
The possibility of exporting Russian gas to Italy and Greece through Turkey could make the country a significant energy transit route, the global rating agency Fitch said on Thursday.

Fitch Ratings released a report about the diversion of the South Stream Pipeline, which was planned to go from Russia to Bulgaria and on to Austria.

Russian President Vladimir Putin announced on his visit to Turkey on Monday that the pipeline will now connect Russia to Turkey.

The newly redirected pipeline will have the same capacity of 63 billion cubic meters a year.

Russian gas could potentially be exported to Italy and Greece through Turkey, which has aroused questions about whether or not Turkey could be a significant energy transit route in the future.

Fitch said that Turkey becoming a transit route depends on the demand of gas markets in Italy and Greece for extra natural gas.

Gazprom will offer Turkey a 6 percent price discount as part of the deal, although the rates of discount have not been determined yet.

Fitch predicted that this would increase Turkey's reliance on Gazprom, which supplied around 59% of Turkey's annual gas consumption in 2013.

Russia's decision to redirect the South Stream natural gas pipeline is as much a reflection of weak European demand as it is of geo-political tensions and European desire to reduce reliance on Russian gas, according to Fitch.

"We believe that there is little appetite among large utilities to commit to more long-term import contracts. This is because demand has been cyclically and structurally weak as market economics favor other sources of electricity generation in many countries," the report said.

Russia's original South Stream project did not receive approval from the EU on the grounds that the project was against EU anti-trust laws.

The crisis in Ukraine is also believed to have influenced the decision.

However, some southern and central European countries had supported the pipeline, despite EU opposition, in order to secure their energy supplies.

The amount of gas being delivered to central Europe via Ukraine has fallen in recent months as volumes through the Nord Stream pipeline via Germany have increased, according to Fitch.

"Looking at capacity alone, European demand for Russian gas can be satisfied by Nord Stream and the pipelines through Ukraine in the medium term," which means that South Stream's extra capacity is not needed, the rating agency added.

"We expect natural gas consumption for electricity generation to gradually decline over the next decade, while overall European gas demand, including industrial, commercial and residential use, will grow only marginally," the report stated.

Fitch estimated that the first sustained increase in gas-fired generation probably will not come until around 2026, as the full effects of retired coal and nuclear capacity are felt.

The report concluded by saying that like the failed Nabucco pipeline project before it, South Stream faced significant challenges, particularly in ensuring sufficient end-demand.