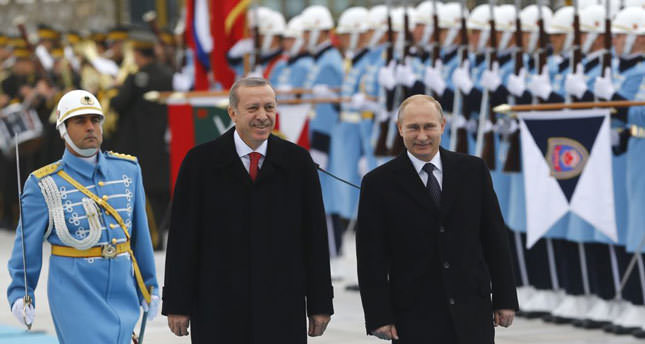 The EU’s Juncker says issues with Russia are not insurmountable and the South Stream can still be built, as countries like Bulgaria, Austria, Serbia, Hungary and Slovenia address the tension, while Turkey seems to be the only winner

The South Stream gas pipeline can still go ahead despite Russia saying it had scrapped the $40 billion project to supply gas to Europe, European Commission President Jean-Claude Juncker said yesterday. His comments are viewed as the EU backtracking on its strict attitude towards Russia.

"With regards to South Stream, the European Union and Bulgaria are working together to solve the outstanding issues. These outstanding issues are not insurmountable," Juncker told reporters after talks with Bulgarian Prime Minister Boiko Borisov. "South Stream can be built. The conditions have been clear for a long time ... The ball is in the court of Russia," Juncker said.

The project was created to find alternative ways to cover Europe's natural gas needs by transporting Russian natural gas to Europe through pipelines laid under the Black Sea over Bulgaria to Hungary, Serbia, Austria and Slovenia. The project, which aims to be completed in 2020, is intended to carry about 63 billion cubic meters of natural gas to Eastern and Central Europe.

The EU was initially against the project, which will increase Europe's dependency on Russia, and the European Commission had reported it would break EU competition rules. Thus, Bulgaria, which is a EU member state, had to suspend the project until June 2014. Construction work on the 930-kilometer South Stream project had began in Bulgaria in October 2013.

As Russian gas giant Gazprom supplies 30 percent of Europe's gas, the cancellation of the project has left Bulgaria, Austria, Serbia, Hungary and Slovenia nervous as to how to maintain its current gas consumption and sustain growing demand.

"If Europe does not want to carry out [South Stream], then it will not be carried out; we are now going to focus our energy resources in other directions," said Russian President Vladimir Putin during his visit to Turkey, and blamed South Stream's suspension to European opposition.

Putin's announcement that they will be working on another pipeline project that will reach Greece caused a stir in countries involved in the project. The governments that are stuck in between their national interests and the opposition of the EU are seeking a solution.

The cancellation of the project has mainly worried the Bulgarian government. Prime Minister Boyko Borisov said that he is unable to get hold of the documents related to the project; therefore, it is not certain how much Bulgaria would actually benefit from the project. However, Borisov emphasized that Putin had announced that the possible proceeds from the project would be an additional 400 million euros annually to the Bulgarian government, and added, "If this is the case, then let's try to save it."

Putin had also suggested that the Bulgarian government request this loss from the EU. Russia's European Union Ambassador Vladimir Chizhov had announced that Russia is ready to continue negotiations with Austria, Hungary and Serbia about the project.

Borisov, who will visit Brussels to meet with Junker and the chairman of the European Parliament, Martin Schulz, is expected to submit a claim for the damages Bulgaria has suffered as a result of the EU's objections to the project.
However, the spokeswoman for the European Commission, Anna-Kaisa Itkonen, said, "In case of this and other such project's suspension, there is no legal ground to file a claim for damages."

Previously, Bulgaria had to cancel plans for the Belene Nuclear Power Plant and Burgaz-Dedeağaç Pipeline projects due to EU's policies, while Serbia, which began negotiations with the EU for full membership in January 2014, deemed the suspension as bad news.

Speaking to state television, RTS, Serbian President Tomislav Nikoliç underscored that Serbia will suffer a loss as a result of the cancellation of the project and that the Balkan country has also suffered from the sanctions applied against Russia. The Serbian prime minister said the seven-year efforts of Serbia in this project have perished as a result of the clashes between major world powers.

Austria is also placing blame with the EU and while the Presidency and the Prime Ministry of Austria has remained silent for the last two days, Austrian President Heinz Fischer and Prime Minister Werner Faymann had signed a deal with Russia in June 2014 for the pipelines to reach Austria despite EU opposition.

While the politicians remain silent, Gerhard Roiss, the chairman of the Austrian-based energy company OMV, underscored that Europe needs Russian natural gas and criticized the EU's policy that the production of the natural gas and the operation of pipelines should be separated. "Europe needs all the pipelines that would reach it. It is not about whether Russia allows it or not. What should be asked is who else is ready to invest in the infrastructure of Europe," said Roiss. Heinz Christian Strache, the leader of the Austrian Liberty Party (FPÖ), the main opposition party, also blamed the EU for the cancellation of the project.

Strache defined the EU's stance as "hara-kiri," and added, "The EU's stance in this respect both damages the economy and proposes a risk for all countries. Bulgaria suspended the project due to EU pressure. It is not a secret that Bulgaria depends on the funds provided by Brussels; however, the policies implemented by Brussels does not reflect all EU citizens."

It is estimated that the cost of the European steel company Voestalpine, which provides materials for the pipelines included in the contract of the project, is around 200 million euros.

The Hungarian government, which is sometimes criticized for its reserved stance towards EU policies, deemed the cancellation of the project as Russia's own decision. "Russia has the right to take its own decisions and Hungary will be respectful towards their decision," Hungarian Foreign Affairs Minister Peter Szijjarto said.

Szijjarto added that the Hungarian authorities who actively support the country's involvement in the South Stream Pipeline project have passed a bill that allows for the commencement of the construction of pipelines at the beginning of November despite the EU's restraints and the National Assembly has accepted an amendment that allows companies without licenses to be involved in the construction of the pipeline.

Gyorgy Harmati, the chairman of the state's electricity company, MVM, noted that the cancellation of the project will not affect their long-term projects and they will find new energy resources.

Slovenian President Miro Cerar affirmed that the cancellation will not affect Slovenia, they have not assumed any liabilities related to investments in Slovenia under this project and that Russia's latest attitude was not surprising. Cerar said that Slovenia needs to explore alternative and renewable energy resources and the Ministry of Investment noted that Russia's decision will not have an effect on Slovenia.

It has been claimed that Russia, which is suffering from EU and American sanctions, is using its natural gas resources as a weapon to influence EU countries. While it was said that European countries will suffer an immediate loss of around 2.5 million euros due to the suspension of the project, some are projecting that companies and politicians will force the EU to lift the sanctions.

Russian President Vladimir Putin announced on Monday during his visit to Ankara that Russia would reduce the price of natural gas sales to Turkey by 6 percent. Nearly 60 percent of Turkey's natural gas supply is provided by Russia, which totals 26.7 billion cubic meters, and this promises to increase by an additional 3 bcm.

Novak's statements were expected by the Turkish government; Turkish Energy Minister Taner Yıldız had stated Tuesday that they will continue to push for a further cut. "Russia's offer is a positive step toward strengthening our collaboration, yet we hope to receive a higher discount," Yıldız told journalists during a press conference in Ankara.

Putin's announcement about the South Stream project and discounts on natural gas for Turkey had broad repercussions in the press. The New York Times' story was: "if there was one winner it was Turkey." BBC News quoted Martin Vladimirov, an energy specialist at the Center for the Study of Democracy in Sofia, saying "It may be a bluff," for the purpose of pressurizing the Bulgarian, Serbian, Hungarian and Austrian governments.

Another statement by Vladimirov is reported as being that South Stream is "simply too big a burden" because of the difficult financial situation Russia's state-owned giant Gazprom is facing. A similar allegation was reported by Germany's Deutsche Welle, relating that Bulgaria's former ambassador to Russia, Ilian Vassilev, said that "the South Stream has gotten too expensive for Russia."

Speaking to Daily Sabah, economist and president of Nişantaşı University, Dr. Kerem Alkin pointed out that Russia has always been a country which likes to foster complicated relations, and it is difficult to understand what it is aiming at this time. Alkin stated that Russia would not act with only one aim in mind; they generally give several messages at once.

"Obviously discounts on natural gas, proposing strengthened trade ties and turning an existent project route over to Turkey are huge gestures. It is important to understand such gestures, proposals and expectations. Russia will certainly ask something in return from Turkey. So we should be aware that this is a bundle of messages rather than a gesture" said Alkin.

Not an alternative to TTIP

Trade negotiations between Turkey and Russia have been followed closely, which raises the question of whether Turkey is giving up on E.U. membership because of the Transatlantic Trade and Investment Partnership (TTIP).

Turkey announced that E.U.-Turkey customs union agreements would be cancelled if Turkey is isolated from the talks on TTIP. Turkish Prime Minister Ahmet Davutoğlu addressed the question by saying "the economic relations we are developing with our neighbor Russia are not an alternative for any other economic partnership.

"Turkey's first priority is gaining full membership into the European Union, and with this full membership, entering into transatlantic investment and trade partnerships. We are extremely determined."
Speaking at the press conference organized after his return from his Brussels visit, the chairman of Turkish Industrialists' and Businessmen's Association (TÜSİAD), Haluk Dinçer noted that during his visit, he realized that the latest geopolitical developments have increased the importance of Turkey for the E.U.

"The Russian president Putin's visit to Turkey and the development of relations between the two countries coincided with our E.U. visit. These relations are being observed closely by the E.U.

"Further, whether Turkey should be involved in the sanctions applied by the U.S. and the E.U. towards Russia was also discussed. However, I can easily say that the E.U. does not want to lose Turkey. It wants to strengthen its ties with Turkey and speed up Turkey's inclusion," added Dinçer.