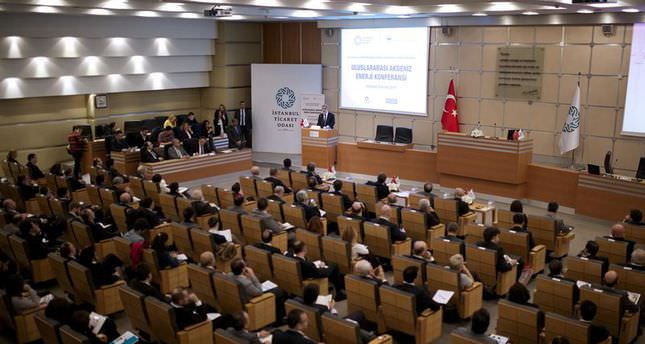 Turkey leans toward natural gas pipeline projects only if the whole island benefits from the resources, says Energy Minister Yıldız said at the International Mediterranean Energy Conference in Istanbul

Energy Minister Taner Yıldız said at the International Mediterranean Energy Conference hosted by the Istanbul Chamber of Commerce yesterday, that Turkey's stance toward the northern and southern regions of Iraq also applies to Cyprus, and that all parties will benefit if the island as a whole can make use of its resources. Yıldız met with his Greek counterpart Yannis Maniatis to discuss ways to ensure that resources found are utilized by the entire island.

He further underscored that while there is a global stance in terms of climate change; people are acting more individualistically in terms of energy expenses. Noting the importance of considering the human factor of new projects, Yıldız said, "Unfortunately, comfort is growing faster than money in the world," and added that crude oil and natural gas are currently used as excuses for wars when they are underground and a reason for peace when they are above ground. "Turkey has always used energy as means to establish peace, and the energy policy created and strategy applied will not only aim to establish the security of the natural gas supply of the European Union, but all of Turkey's neighbors," Yıldız added.

Once the required political feasibility is achieved in the Mediterranean basin, Turkey will also demonstrate the necessary efforts to establish economic feasibility. And provided that the current status of Cyprus is considered, Turkey is open to any pipelines that will cross through the country and be distributed fairly, according to Yıldız.

Turkey has never exploited the advantages it has due to its geographic location in any project, and has always believed that the global energy sector should be used for building peace. Yıldız also touched on the fact that with the projects it has developed, Turkey has assumed a positive attitude in conveying all underground resources of Turkmenistan, Azerbaijan, Iran and Iraq to consumption points.

"All projects implemented until now are proof of this. The Baku-Tbilisi-Ceyhan crude oil pipeline, the Kirkuk-Yumurtalık crude oil pipeline and currently the TANAP natural gas pipeline projects were all based on conveying the natural resources of neighboring countries to the rest of the world," Yıldız said.

The policies implemented by Turkey in Iraq in terms of natural gas and crude oil all aim to support normalization of the country, and according to both Yıldız and that the agreement reached between the Baghdad and Erbil governments, it was revealed that Turkey has reached the targets it set two years ago. "Our capacity in Iraq will increase on a daily basis. Hopefully, with 1.5 million barrels within the next two years, Iraq's energy trade will return to normal," Yıldız added.

Algeria to contribute to energy supply of Turkey

Delivering a joint press-conference with his Algerian counterpart, Youcef Yousfi, Energy Minister Taner Yıldız said that they agreed on a win-win price regarding Turkey's purchase of 4 billion cubic meters of liquefied natural gas to meet the requirement, which particularly increases during winter months. Yousfi noted that they do not want to confine this cooperation only to energy, but to expand their partnership in all fields including industry, tourism and agriculture, adding, "We wish to conduct joint energy projects with Turkish companies in the production and exploration of petrochemicals and other products."

Projects with only EU or Russia not a choice to make

In response to the question of whether Turkey will straddle the gap between Russia and the EU regarding sanctions, Energy Minister Taner Yıldız said, "Turkey is developing its projects by observing its national interests, as well as those of Russia and the EU. Turkey is striving to increase its exports in agriculture and Russia is not a trivial country for us in this regard. Therefore, I do not believe that Turkey will be pushed to choose between Russia and the EU. Turkey has the capability to develop projects with both entities. I do not believe that the nuclear power plant [being constructed by Russia in Turkey] will suffer setbacks either."