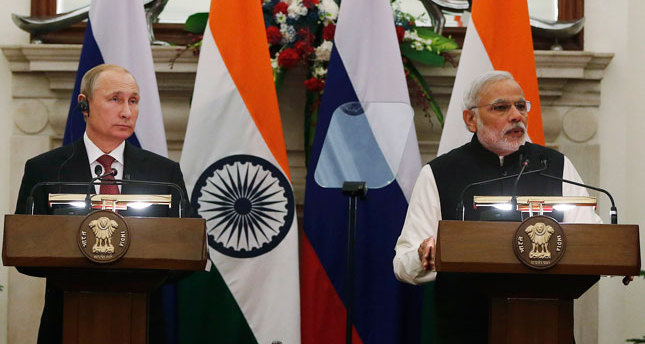 Facing a stumbling economy at home and increasingly biting Western sanctions, Russian President Vladimir Putin sought yesterday to strengthen once-close relationship with India through an ambitious plan to help New Delhi build at least 12 new nuclear reactors. Putin and Indian Prime Minister Narendra Modi ended a day of talks by announcing a clutch of agreements in energy and defense, including a plan to manufacture advanced Russian military helicopters in India, and the possibility of exporting them to other countries.

The Indian prime minister sought to reassure his people about the safety of the reactors, saying they would have "the highest standards ... in the world." The two countries also pledged to cooperate in uranium mining, producing nuclear fuel and handling nuclear waste, Putin said. The agreements were announced jointly but clearly benefited India and reflected Russia's need for allies in the face of Western sanctions over Moscow's annexation of Crimea and the conflict in eastern Ukraine.

The United States and Europe have imposed sanctions for what they say is Moscow's role in helping Ukrainian rebels, a charge Russia denies. "Deepening of cooperation with India is Russia's foreign policy priority," said Putin, who is confronted with plunging global oil prices and a depreciating ruble that threatens to push his country into recession.

India and the former Soviet Union shared a close relationship during the Cold War, while the United States tilted toward India's neighbor and rival, Pakistan. India bought billions of dollars worth of military hardware from Moscow during the Soviet era, and still buys nearly 70 percent from Russia. But as India's economic clout has grown, it has also diversified its defense shopping, with major purchases for military hardware from the United States, Israel and France.

India is now the world's biggest arms importer, with an economic boom that has enabled it to modernize its military. New Delhi's needs include everything fighter aircraft to submarines and Putin is hoping he can snag as many of deals as possible for Russian defense companies.

He got some reassurance from Modi, who said that Russia would continue to be India's prime supplier of military hardware. "Russia has been India's foremost defense partner through the decades," Modi said. "Even as India's options have increased today, Russia will remain our most important defense partner." Modi and Putin told a joint news conference that Russia also hoped to attract Indian oil firms to invest in its Arctic Shelf.

Later Thursday, the two countries announced that 12 Indian companies will buy diamonds worth $2.1 billion over the next three years directly from the Russian diamond mining giant ALROSA, cutting out middlemen in the diamond trade. Russia is the world's top producer of rough diamonds while India is the world's biggest hub for cutting and polishing diamonds.