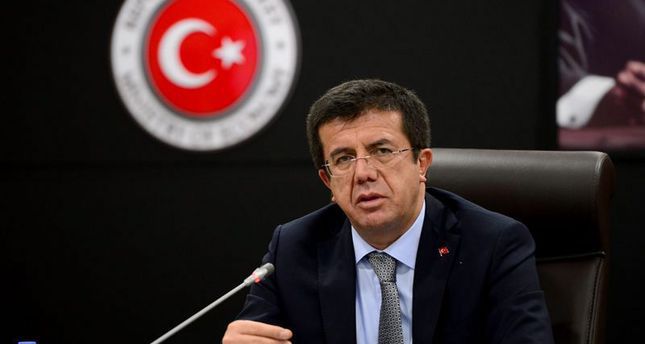 The Turkish lira hitted a historic low of 2.40 to the dollar, however the economy minister defended the market saying it can withstand fluctuations and can remain stable within its own monetary rules

At a press conference following the Export-Based Production Strategy Review Board's meeting held at the Economy Ministry, Economy Minister Nihat Zeybekci said that the market is capable of withstanding fluctuations on the rising dollar exchange rates and can remain stable at a reasonable and acceptable level within its own monetary rules and regulations.

The Turkish lira dropped in value against the dollar yesterday, hitting a historic low of 2.40 per dollar. The move lower is due to expectations that the U.S. Federal Reserve is planning an interest rate hike after its monetary policy meeting. Higher U.S. interest rates could spur an outflow of capital from many emerging markets, including Turkey, where private-sector foreign debt is now at $165.2 billion.

On the depreciation of the Russian ruble and how this may affect trade relations between Turkey and Russia, Zeybekci said that Turkey will definitely benefit from this opportunity by succeeding in meeting the requirements of Russia, which is a commodity exporter who will suffer as a result of the decreasing energy prices and increasing exports. Zeybekci emphasized that they have been discussing the elimination of obstacles in trade with Russia with all related ministries, and Turkey has notified Russia of its desire to sign a free trade agreement for areas that are excluded from the Customs Union. He also added that the negotiations are drawing to an end.

On the increase of foreign exchange rates, Zeybekci said, "I have emphasized that we should be at ease in terms of the economy, as there are no risks or threats in terms of our public financing, internal and external public debt. The market will endure and adapt, and we must closely observe fluctuations that occur as a result of speculation. As someone that has experience in exports, I believe there will be a stir until Dec. 24th or 25th, and I'm not sure if this will create greater fluctuation. Until Jan. 5th or 10th, the markets will be active, as the fund entry and exit accounts will be closed and reopened at the end of the year. I don't think Turkey needs strong intervention, I believe the market is strong enough to adapt."

Borsa Istanbul started the trading day at 82,444.48 points, then tumbled 2778.49 points to 79,787.75, a drop of almost 3.7 percent. When the lira hit the 2.41 mark, the Central Bank announced that all foreign exchange needs of state enterprises will be directly supplied by the bank. Following the bank's announcement, the lira recovered to around 2.37, and the BIST-100 Index bounced back slightly to 79,830.96 points.