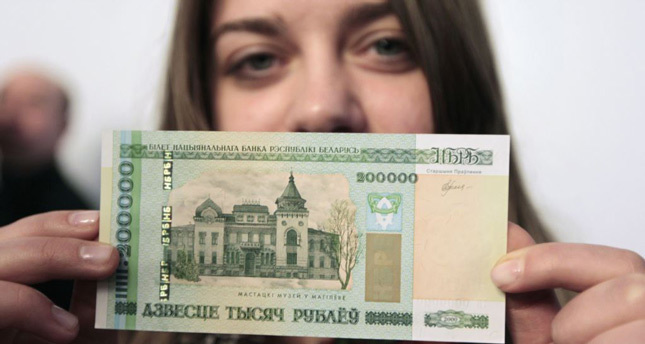 Russia’s economy continues to stagger as oil prices and the ruble plunge further in global trade, prompting Russian policymakers to scrape the bottom of the barrel to find ways to rescue the country

Russia raised its key interest rate by 6.5 percent to 17 percent before markets opened on Tuesday in an attempt to parlay with speculators and shore up the ruble. The action ultimately resulted in Russia's currency plummeting against the dollar and the euro by almost 20 percent during the day. The dollar fetched 68 rubles by close of trade Monday, but by the end of Tuesday, one U.S. dollar could get you 80 rubles when the market closed Tuesday.

The ruble has lost 50 percent of its value against the dollar since January, and investors are concerned that Russia may default on its foreign debt obligations, which would result in massive financial losses for its lenders, a situation not dissimilar to that which occurred in 1998 only this time Russia would be hard pressed to find any bailouts from the International Monetary Fund or the World Bank, both of whom answer to their major contributor - the U.S.

Silicon Valley-based Apple also said on Tuesday that the instability of the ruble has complicated price setting for their operation in Russia, which as a result closed it online store there.

The massive interest rate hike and the negligible positive effect it had on the ruble clearly indicates that investors are not buying what Russia is selling, further reducing the amount of policy tools available for officials to use to combat the worst economic crisis in the country since 1998 when Russia defaulted on its national debt. With oil prices continuing to free fall and President Obama signing off on a new sanctions bill on Tuesday, Russia's limited alleviation paths continue to shrivel up.

According to Bloomberg Markets Executive Editor Joe Weisenthal, one of the few tools left for Russian policymakers would be to implement capital controls in order to stop capital flying out of the country. He rejected the possibility of a further interest rate hike as 17 percent is already crippling the Russian economy, which Russian economists expect to contract by at least 5 percent for the year 2015, according to current forecasts.

Capital Economics said in a note, "While we would not rule out the possibility that the Russia could impose low-level capital controls in an effort to halt the slide in the ruble, we think there are good reasons why more stringent controls will remain a measure of last resort."

This seems to be a popular sentiment according to a Bloomberg survey of 18 economists that suggests that the Russian central bank will spend $70 billion - almost a sixth of its reserves - before engaging in any formal discussions of capital controls.

Western powers, by expanding their months-long sanctions, are hoping to budge Putin's stance on Ukraine which, according to numerous accounts, has seen separatists in the eastern region of the latter galvanized by Russia in order to hold control of the Crimean Peninsula. Putin, with over 80 percent approval shored up at home and support from the Kremlin and the Bank of Russia, has overseen an economic arsenal deployed to try and steady the shaky economy. However, reports suggest world leaders and government officials shouldn't expect any shift in Putin's position.

Senior strategist at VTB Capital Maxim Korovin told the Financial Times, "There is a good chance that the ruble yesterday touched its low watermark."

He also stated that if the government lived up to its promise to "underpin financial stability" there should be "some ruble recovery, because it is fundamentally undervalued."

Oil, after big losses on Asian markets Wednesday, plummeted to its lowest level in five years, dipping below the $60 a barrel mark for the first time since 2009. Futures contracts for Brent crude for February fell to $59.19 on the first day of trade, while Brent for January finished $1.20 lower at $59.86 in London.

According to a Wall Street Journal survey, analysts speculated reserves to have fallen by an average of 1.9 million barrels in the week finishing Dec. 12.

The turbulence of the oil price decline has largely been attributed to increased supply (or OPEC's maintained supply) outweighing the declining demand in countries such as Europe, Japan and China. As such, many analysts expect the prices to hover around the current years-long lows for some time. But as the price drops further, there is growing fear that the contraction in demand signals weaker growth for the future, more so than analysts had originally expected - something that could worsen Russia's current position markedly - David Joy, chief market strategist at Ameriprise, told AP news agency.

"Oil hasn't found a bottom yet, so the pain is only going to get worse as the price of oil continues to fall," Joy said.