Turkey is the partner of TANAP, not the South Stream 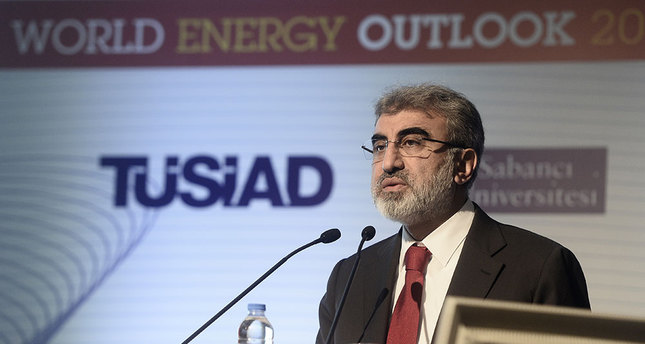 Reminding that Turkey is not the partner of the South Stream, Energy Minister said it is irrelevant to question a choice between EU and Russia, and Turkey will not be a part of oil and natural gas tensions

Energy Minister Taner Yıldız said that many questions have been directed to the ministry regarding Turkey's involvement in the South Stream Project. The minister emphasized that Turkey was not a party to the South Stream Project but to the Trans Anatolian Natural Gas Pipeline Project (TANAP), and discussed Turkey's involvement in TANAP at the introductory meeting of the "World Energy Outlook 2014" conference organized by the Turkish Industrialists and Businessmen's Association (TÜSİAD) and Sabancı University's Istanbul International Center for Energy and Climate (IICEC).

Together with Azerbaijan, Turkey is one of the most important countries involved in TANAP and its share in Şahdeniz has been increased to 19 percent, becoming the second largest investor following British Petroleum. Furthermore, Turkey's shares in TANAP previously increased to around 30 percent from 20 percent, and it even holds more shares in the project's Azerbaijan phase than Azerbaijan.

Yıldız noted the project should be commissioned within the next four years synchronously, as the project consists of four main stages: The production of natural gas in Şahdeniz, transfer of the gas to Georgia, delivery of the gas through TANAP to Turkey and the transportation of the gas to Italy through the Trans Adriatic Pipeline (TAP).

On Turkey's efforts and progress in TANAP, Yıldız said that the tender process of the 800-kilometer pipeline has been completed and Turkish firms have won 80 percent of the tender. "The tender for workmanship was a four-phased process and three phases have already been completed. About 600 kilometers of the Project have now been expropriated. The project is an ongoing one, just like our resolutions on nuclear power plants, this project is the realization of our decisions," Yıldız added.

Underlining that the emphasis put on Turkey increased after the Arab Spring and due to the ongoing turmoil in the Middle East, Yıldız reminded that Turkey has always believed that natural gas and crude oil became one of the reasons of war when it is underground and of peace when it is above ground, and has tried to stay away from conflict in this respect. "We will continue to take a firm stance against getting involved in any conflict regarding oil and gas," Yıldız said.

Yıldız further added that Turkey's stable and consistent stance is not just beneficial for its own but also for European countries. On the recent discussions about the South Stream Project and Turkey's involvement in it after Russian President Vladimir Putin's visit to Turkey, Yıldız said that such questions on whether Turkey will chose the EU or Russia were irrelevant, as Turkey is not a party nor a partner in the South Stream Project.

"Who are the parties in this project, which from time to time is depicted as illegal? As far as Turkey is concerned, the South Stream Project is not illegal nor is it a wrongdoing against any country. As always, we believe it is a crucial project that is capable of providing a solution for the medium- and long-term natural gas requirements of EU countries. Whether it is feasible or not, is not Turkey's concern," Yıldız said.

The parties of the South Stream Project are three EU countries and there has been speculation about whether the EU's economic balance will deteriorate with Turkey's participation in the project. The realization of the project has long been in dispute, and as Yıldız pointed out, Putin announcing during his visit to Turkey that the project has been shelved was a surprise for most. Putin had said that while the South Stream Project was over, the Turkish Stream Project may still be discussed and sale of natural gas to Europe through Bulgaria will not take place. "Turkey will not withdraw from working towards full EU membership, but neither will it give up on establishing tight relations with countries such as Russia," Yıldız added.

Yıldız further underscored the mutual interest both countries have in each other and pointed out that only goodwill agreements, which do not contain any binding measures, have been signed between the two countries. However, both BOTAŞ and Gazprom will cooperate to explore the advantages Turkey's geography has to offer and to what extent such benefits can be utilized.

"It doesn't mean we give up on a country when we make a deal with another one," Yıldız emphasized, and highlighted the goodwill agreement signed with the U.S. two months ago, which has not caused such a stir. "With its growing economy, developing politics and progressing structure, Turkey has the capacity to embrace and manage many other similar projects," Yıldız said.

Iraq's stability is concern of Turkey

Commenting on Turkish oil consumption and the country's relationship to Iraq, Energy Minister Yıldız said, "There will be a capacity increase of 14 million barrels of oil by 2040 and at least 4 million barrels of it will be supplied from Iraq. Therefore, Turkey cannot be indifferent to the events in Iraq. Nobody can veil this fact; that's why Turkey has made the right decision. The relations with Baghdad and Irbil will strongly continue from now on. We had fruitful meetings with the Iraqi officials; there will be a strategic cooperation meeting on Thursday and the Iraqi prime minister will participate. We will have a chance to negotiate about these issues in detail."

Yıldız also said that Turkey would form new agreements with new companies in the coming months. "The energy in Iraq will influence trade volumes as a part of agreements with Baghdad and Irbil. The instability in Iraq requires our attention as does its stability," Yıldız added.