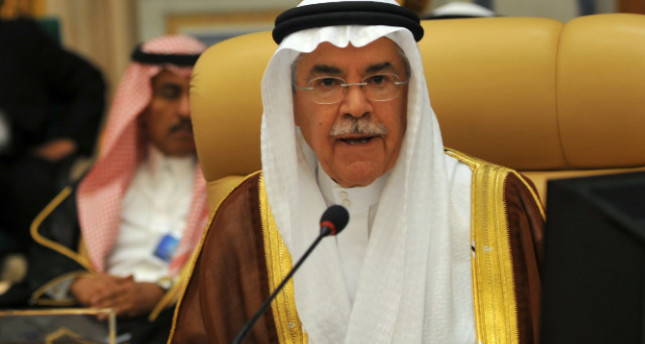 In one of the toughest signals yet that the world’s top petroleum exporter plans to ride out the market’s biggest slump in years, Saudi Arabia said it will not cut oil output even if non-OPEC nations do

Referring to countries outside of the Organization of the Petroleum Exporting Countries (OPEC), Saudi Oil Minister Ali al-Naimi told reporters: "If they want to cut production they are welcome: We are not going to cut, certainly Saudi Arabia is not going to cut." He added he was "100 percent not pleased" with prices but they would improve, although it was unclear when.

He blamed the fall in prices to half their levels of six months ago on speculators and what he called a lack of cooperation from non-OPEC producers. His remarks at a conference in Abu Dhabi marked the second time in three days that the kingdom has signaled that it would not alter output levels, preferring to allow the market to stabilize on its own.

The determined tone of his comments was echoed by some other Arab oil ministers at the conference in the United Arab Emirates (UAE) capital. UAE Oil Minister Suhail Bin Mohammed al-Mazroui urged all of the world's producers not to raise their oil output next year, saying this would quickly steady prices. He did not elaborate. The world is forecast to need less OPEC oil in 2015 because of a rising supply of U.S. shale oil and other competing sources, with no significant increase in world demand growth.

Kuwaiti Oil Minister Ali al-Omair said OPEC did not need to cut production and would not hold an emergency meeting ahead of its next scheduled talks in June. "I don't think we need to cut. We gave a chance to others (and) they were not willing to do so," he said, referring to contacts with non-OPEC producers before OPEC's meeting in November in Vienna.

There, OPEC kept its target output of 30 million barrels per day (bpd) unchanged, leaving the market to balance itself without the group's intervention. That stance was seen as a shift from a longstanding policy in which OPEC powerhouse Saudi Arabia has acted as a swing supplier. Asked about possible cooperation between members of OPEC, which include the world's lowest-cost producers, and non-member countries, Naimi replied: "The best thing for everybody is to let the most efficient producers produce". He also said that OPEC's decision would ultimately help the world economy. "Current prices do not encourage investment in any form of energy, but they stimulate global economic growth, leading ultimately to an increase in global demand and a slowdown in the growth of supplies," he said. Iraq's oil minister, Adel Abdel Mahdi, said he saw no need for an OPEC emergency meeting but "we have to wait and see" whether the group was right to keep output unchanged. Naimi denied politics played a role in the kingdom's oil policy and said the price fall would not have "a noticeable and big" impact on Saudi Arabia or other Arab economies. The market slide has triggered conspiracy theories, ranging from the Saudis seeking to curb the U.S. oil boom, to Riyadh looking to undermine Iran and Russia for their support of Syria. Before the Vienna meeting, there were hints that Russia could cut output or exports if OPEC did the same. But the message from Moscow after the meeting was that the world's second largest oil exporter would maintain its output.