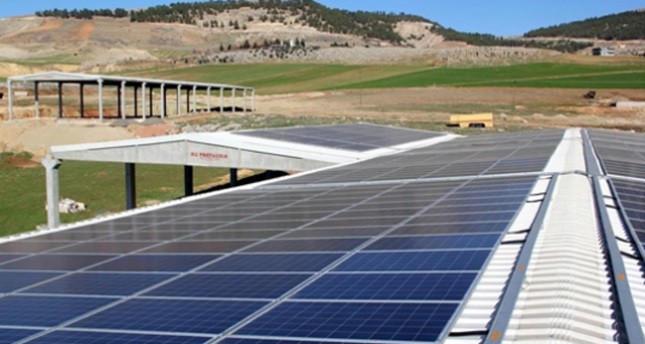 by AA Dec 28, 2014 12:00 am
Running a sugar and bulgur production plant and a packaging facility in Adıyaman's Organized Industrial Zone since 2006, 36-year-old entrepreneur Fehmi Yılmaz has begun satisfying the plant's energy requirements with a solar energy system that he founded on the plant's roof.

After presenting his project to the Rural Development Investments Support Program of the Food, Agriculture and Livestock Ministry and getting approval, Yılmaz spent TL 710,000 ($306,384) for the installation of 800 solar panels and eight inverters on the plant's roof. The system, which was established due to the increase in electricity prices and high bills, has a capacity to generate 200 kilowatts of electricity.

During an interview with the Anadolu Agency, Yılmaz said he wanted to make use of Adıyaman's geographical position, which enables the city to have sunny days most of the year. Yılmaz also noted that TL 350,000 of the total cost of TL 710,000 was donated by the Ministry of Food, Agriculture and Livestock, adding, "The plant produces 20 kilowatt hours per month in winter, minimizing the electricity bill by around TL 4,000 to zero."

Yılmaz said that electricity generation would increase in summer and that they planned to sell surplus electricity to the Turkish Electricity Distribution Company (TEDAŞ) and recommended that all agriculture-based enterprises to set up a solar power plant.

Food, Agriculture and Livestock Provincial Director Adil Alan stated that the ministry would donate and cover 50 percent of the cost if agriculture-based industrial enterprises set up a solar energy production facility, continuing: "Last year, the country's current account deficit hit $65 billion, $53 billion of which stemmed from natural gas and oil. We believe that these kinds of investments, which the ministry encourages, are important. We donated TL 400,000 for similar projects in previous years, whereas it will reach TL 1.5 million as of 2015. Such projects pay for themselves in six to seven years."