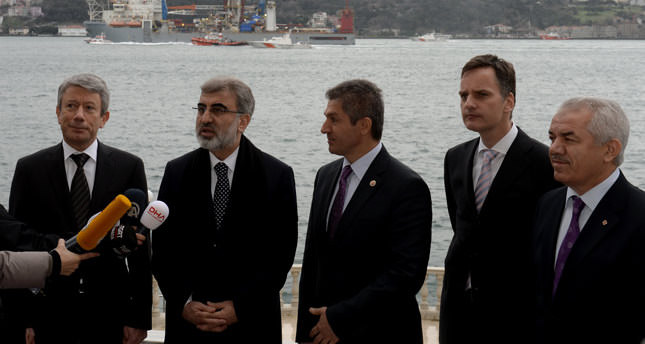 by Daily Sabah with Agencies Jan 07, 2015 12:00 am
The Turkish state-owned energy company TPAO and one of the world's leading energy firms, Shell, will start oil-and-gas explorations in January in the western Black Sea, the Turkish Energy Minister Taner Yıldız said yesterday. He made the comments during a ceremony held at Çırağan Palace in Istanbul, which marked the start of drilling operations. Pointing out that there has been an increase of nine percent in the number of opened wells compared to the previous year, Yıldız stressed that Turkish seismographic research vessel, Barbaros Hayreddin Paşa is fulfilling a very important duty in terms of function and prestige. Yıldız stated that "The Barbaros Hayreddin Paşa vessel has been revealing seismic data since we bought it. But that vessel is not enough for us. There is another seismographic research vessel which is now being built up in Tuzla. It will be put to sea in March at the latest, and will begin oil exploration in September. That ship will be produced with national resources. If we find oil, we will also build a drilling platform using national resources, which will decrease the cost." Even though Turkey is not a country with proven oil reserves, the Turkish Petroleum Corporation (TPAO) is conducting oil exploration works with private companies. Minister Yıldız stated that 45 oil exploration and production companies, 28 of which are national and 17 are foreign, conducted 226 exploratory drillings in an area of 301,000 kilometer square in Turkish territory on land and at sea in 2014. Yıldız added that 188 oil wells were also drilled in the same year.

TPAO General Manager Besim Şişman said that "Decreasing oil prices require us to review our activities and designate our priorities accommodating ourselves to circumstances." Shell, in cooperation with TPAO, will search for oil and natural gas in the western Black Sea. Equipped with state-of-the-art technology, the drilling vessel, which will conduct the exploration works, will be supported by three ships and two helicopters. 240 people are planned to work in the project." The chairman of Shell Turkey, Ahmet Erdem, remarked that "We are bringing Shell's global expertise to Turkey to create a value in our country by using Shell's product and service range, global experience, high-technology based on research, development and innovation. Five percent of Turkey's oil needs and two percent of its natural gas needs are met with national resources. With this new well, we will obtain significant data whether there are hydrocarbon resources in Western Black Sea. These explorations works are important since Turkey wants to increase its national oil and natural gas production."