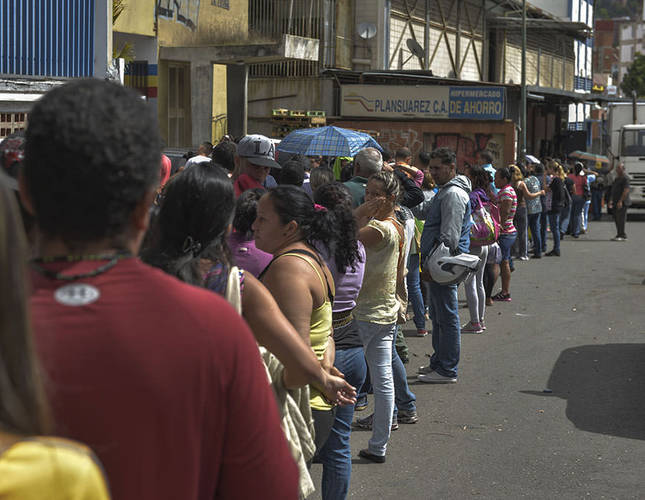 The New York-based rating agency cut Venezuela's rating from Caa1 to Caa3 - nine notches below investment grade - as well as changed its outlook to stable from negative, signaling a change in the rating in the near future is unlikely.

The "key drivers" behind the rating review were that Venezuela's "default risk has increased substantially as external finances continue to deteriorate due to a strong decline in oil prices," Moody's said in a statement. It added that bondholders were likely to suffer a loss of "greater than 50 percent" in subsequent restructuring should such a default occur.

"The dramatic oil price drop, which we expect will be sustained, will negatively affect the balance of payments and will more than outweigh the potential benefits of future foreign investment inflows," Moody's said. "Given a heavy dependence on imports, external finances remain very rigid, decreasing the possibility of import adjustment to prevent a balance of payments crisis."

The decision by Moody's followed cuts by other ratings agencies in the second half of 2014 to similar "extremely speculative" grades, denoting a high risk of default. Standard & Poor's cut the country's rating to CCC+ in September, while Fitch downgraded Venezuela to CCC in December.

As Venezuela depends on crude oil for 96 percent of its exports, it has been hit particularly hard as the global price for the commodity has fallen nearly 60 percent since June 2014.

President Nicolás Maduro has previously said prices needed to return to around $100 a barrel, but many analysts believe $120 a barrel is required to meet its spending needs.

During the last week, Maduro has been on a world tour, visiting China, Iran and several OPEC countries, in a bid to secure cooperation on steps to boost oil prices. He visited fellow OPEC member Algeria on Tuesday after securing what he described as "sufficient oxygen" from a deal with Qatar to "cover the fall of oil prices," he was quoted by Noticias24, as he pledged a new level of cooperation on strengthening the oil market.

"We will build consensus to a new level to stabilize [oil prices] for several years at fair prices with costs in line with the world economy, but which will also help OPEC countries to continue developing," Maduro said after meeting with the emir of Qatar, Tamim bin Hamad Al Thani.

Maduro also visited China last week where it was announced that Venezuela had secured $20 billion of Chinese investments, including energy, industry and development projects.

Venezuela's central bank recently announced the country's GDP had contracted in the first three quarters of 2014 – shrinking 4.8 percent, 4.9 percent and 2.3 percent, respectively. Annual inflation reached 63.6 percent in November – the highest in the Americas and one of the highest globally.

The country's economic woes have triggered severe shortages of some staple products, with government-controlled supermarkets now limiting the amount of certain products customers can purchase. The opposition has said the move is tantamount to rationing – something the government denies, instead blaming international factors and illegal smuggling.