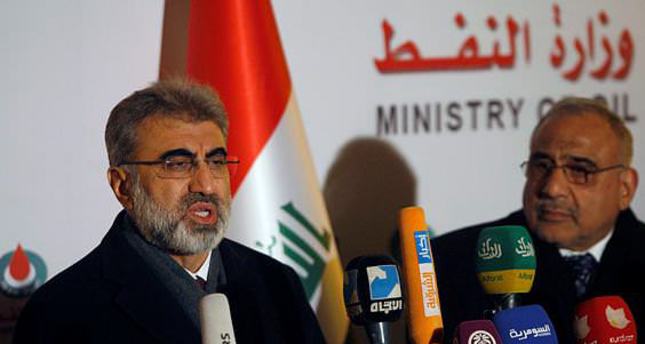 After Iraqi oil, Turkey will sell natural gas of Iraq to the world. Works of technical analysis on a new natural gas pipeline will start soon. According to economist Cemil Ertem, this natural gas corridor will be developed in the scope of the Southern Gas Corridor Project. Turkey also plans to build an industrial zone in Iraq. A memorandum of understanding (MoU) will be signed between Turkey and Iraq in Baghdad, which contains five new agreements to determine the areas of cooperation between two countries.

Two neighbours also agreed to increase Iraq's oil exports via Turkey's Ceyhan port. On the subject of exporting oil from Iraq, Yıldız said: "We wish the Kirkuk-Ceyhan Oil Pipeline to operate at full capacity." The Iraqi Minister of Oil Adil Abdul-Mahdi said that the government will increase the crude oil delivery to Turkey's Ceyhan port via pipeline to around 600 million barrels per day by April. "Turkey contributes to Iraq's development with investments in various sectors," he said. "We would like to thank Turkey for its support." Yıldız insisted that Turkey will continue to support Iraq and will increase humanitarian aid to the country.

The number of flights will also be increased between Iraq and Turkey. Also, a conference will be organized in Istanbul next month to promote investment opportunities in Iraq. A committee specialized on joint investments will be established as well.

Furthermore, Turkey has offered to sign a social security agreement to Iraq, regarding the obstacles of Turkish labor force and Turkish companies invested in Iraq faces.

An industrial zone in Iraq

With referecence to the MoU signed, Turkey will start to search for the possibilities to build a new industrial zone in Iraq and work on new customs gates will be sped up. An expert Turkish delegation wil visit Iraq in the coming days.

Turkey will send a power-generation ship to Basra, Energy Minister Taner Yıldız, Turkey's energy minister said on Sunday. "The ship will provide much-needed electricity for the city," Yıldız said at a press conference in Baghdad with his counterpart from Iraq.

"Basra currently has about 250 megawatts of electricity production capacity. The Turkish power ship will add 410 megawatts more," he said.

Turkey-based Karadeniz Holding is the developer, owner and operator of a fleet of power ships with an overall capacity of more than 1,100 megawatts. It currently has ships in Iraq, Lebanon, Pakistan, Dubai and Ghana. A power ship is a special purpose naval vessel that generates electricity.