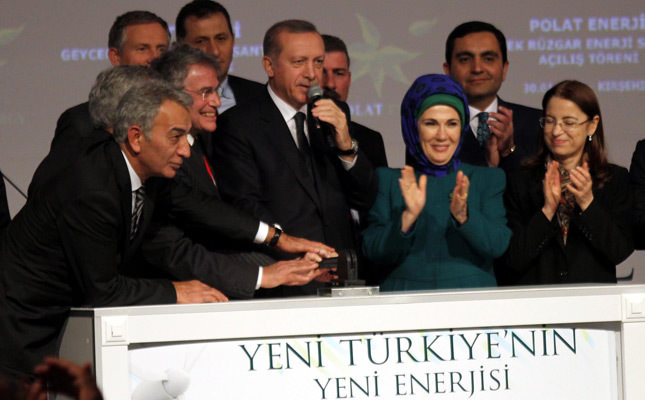 The Geycek wind power plant, which will replace demand for TL 40 million worth of natural gas, was opened by President Erdoğan. Polat Energy’s 190 million euros investment will produce around 400 million kWh of electricity

The Geycek wind power plant opened with a ceremony attended by President Recep Tayyip Erdoğan in Kırşehir, a province in central Anatolia. The plant is an investment of Polat Energy worth 190 million euros, credited by Garanti Bank.

President Erdoğan stated that like every other sector, the private sector is preferential for energy investments. He further added that the Geycek wind plant will cover the high natural gas demand of Turkey, which equals Tl 40 million annualy.

The Geycek Wind Power Plant is scheduled to produce around 400 million kilowatt hours of electricity with 70 wind turbines, and provide for the whole electricity requirement of Kırşehir. Furthermore, the project will decrease the 245 thousand tons of carbon dioxide emissions, equaling 20 million trees each year. The funds provided by Garanti Bank are the highest provided for a wind power plant in Turkey to date. Garanti Bank has provided in total $2 billion to around 50 wind power projects. Polat Energy has been operating in the field of electricity production and trading since 2000. The company is a shareholder of six wind plants with 50 percent shares, and owns two wind plants. Net investments of the company totals 608.5 million euros.

According to official data released by the Turkish Electricity Transmission Company, the amount of electricity generated by wind power plants in Turkey reached 8,366,804-megawatt-hours, marking an 11.65 percent increase in 2014 when compared to the previous year. Turkey has begun reaping the benefits of recent investments made in domestic and renewable energy resources. This increase has also enabled an $850 million decrease in natural gas imports. Turkey implements incentive programs for wind power plants as part of energy production based on renewable sources. Turkey pays $0.07 per kilowatt-hour for wind power plants, and the government is aiming for the installed capacity of wind power plants to reach 20,000 megawatts by 2023. With the commissioning of the Geyzek Wind Power Plant, the installed capacity of wind power plants financed by Garanti Bank has reached 1,200 megawatts, one third of the whole installed capacity in Turkey. Garanti Bank's Deputy General Manager, Ebru Dildar Edin stated that they are now a leader with 35-percent market share in wind energy, and will strive to continue investing in this sector. "We've provided financing of more than $500 million to wind power plants with a 400-megawatt capacity within the last year. Considering that the current established wind power capacity has increased by 870 megawatts, we believe it is evident how this 400-megawatt capacity is important for the potential of our country. In the future, we will continue to invest in sustainable renewable energy, including solar and wind energies," said Edin. BBVA (Banco Bilbao Vizcaya Argentaria), one of the biggest banks in Spain, had agreed to pay two billion euros ($2.50 billion) to acquire a 14.89-percent stake in Turkey's Garanti Bank and raise its total holding to almost 40 percent in November.