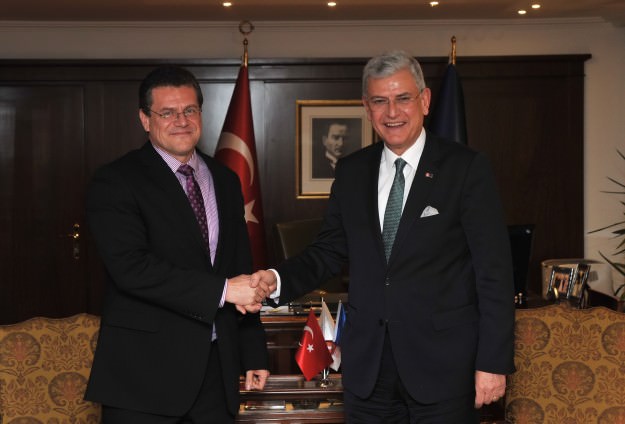 by Anadolu Agency Mar 17, 2015 12:00 am
Turkey and the EU will sign a memorandum of understanding on Tuesday, which will be focused on connecting European energy markets and natural sources from the Middle East and the Caspian Sea, officials announced Monday.

The Turkish minister for European Union affairs Volkan Bozkir and the vice-president of the European Commission Maros Sefcovic met in Ankara on Monday to discuss further cooperation in energy.

"Energy dialog meetings through the new memorandum of understanding will be better organized," Bozkir said.

The construction of the Turkish-leg of the TANAP will also begin on Tuesday in Kars, located in northeastern Turkey.

Sefcovic also said that TANAP was not only important forTurkey but also for Europe.

"The southern gas corridor and TANAP are key projects to which European union attaches a very high political priority," he said.

The Trans-Anatolian Natural Gas Pipeline, TANAP, is part of the Southern Gas Corridor, which plans to carry natural gas sourced in Azerbaijan near the Caspian Sea, to Europe through Turkey.