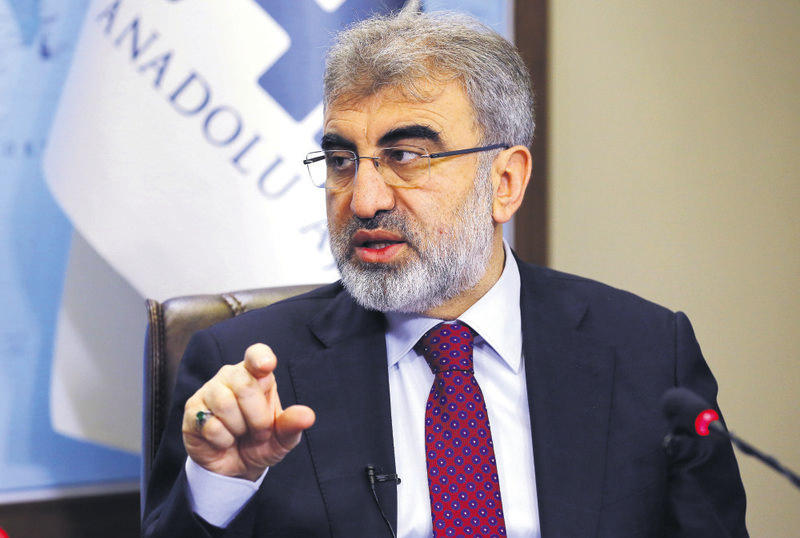 With Turkey working on a regional natural gas corridor as well as other ongoing projects, the energy minister says Turkey does not have any demands on opening a new energy chapter from the EU claiming their policies are less stable

Energy and Natural Resources Minister Taner Yıldız said Turkey no longer demands the European Union to open the energy chapter. "Turkey has a more consistent, stable and rather selective energy policy and strategies. EU countries try to form their policy and strategies on their own, based on an evasive attitude," Yıldız said. Regarding the participation of Turkey in the EU's Energy Union, Yıldız said Maros Sefcovic, the vice president of the European Commission in charge of the Energy Union, adopted a very constructive perspective during the meetings in Italy, Azerbaijan and Turkey.

"We said Turkey does not have any demands for the opening of the energy chapter. Small political issues prevent the formation of an important organization, and the energy chapter is yet to be opened for some reason," Yıldız stressed, adding that Sefcovic is aware of the situation. "Turkey fulfills the EU's demands not only concerning natural gas, but also offers a solution to the natural gas problem within its member countries," Yıldız said.

The minister said the current situation is beyond the framework of agreements, and the cancellation of the Nabucco Project will bring disadvantages to North European countries. The Nabucco Project was a proposed natural gas pipeline from the Turkish-Bulgarian border to Austria, and was aimed to diversify the natural gas suppliers and routes for Europe - thus decreasing European dependence on Russian energy. The main supplier was planned to be Iraq and other potential suppliers were Azerbaijan, Turkmenistan and Egypt. When the Nabucco Project was cancelled, the Trans-Anatolian Natural Gas Pipeline (TANAP) project, which will carry gas from Azerbaijan to Europe via Turkey, became an alternative route for Europe to ensure supply security. Yıldız said that Turkey is on the way to achieving its target through the TANAP project. "EU countries did not take any responsibility for the Nabucco pipeline but Turkey built a 1,900 km pipeline, the Trans-Anatolian Natural Gas Pipeline," Yıldız said, emphasizing that the pipeline made a huge difference for Northern European countries. He said that whether its name is Nabucco or TANAP, Turkey will complete its task and will benefit from these pipelines. "The project, which was launched by President Recep Tayyip Erdoğan on March 17, continues in six building sites, and the pipes are currently being installed," he went on to say.

Adding that EU countries hold the project in high regard, Yıldız said that natural gas brought by the TANAP will be transferred to Europe through the Trans Adriatic Pipeline (TAP). He further stressed that Turkey will begin receiving 6 billion cubic meters of natural gas via the TANAP as of 2018.

There were many complaints from Brussels after the cancellation of the South Stream project, which was supposed to carry Russian natural gas to Europe via Bulgaria, as well as the project's partners, France, Germany and Italy. When Russian President Vladimir Putin said that the South Stream was cancelled and talks for the Turkish Stream began, the partners of the original project began asking where the idea for the project originated. Yıldız stated that Turkey is still not the partner of the Black Sea part of the project, which will cost 16.5 billion euros. "We will continue with the right policies. So, whether they open the energy chapter or leave it closed, we will do what we believe is true because we have seen that we gain more power by doing the right things. And we believe we are not the only ones who needs to do the right thing," Yıldız said.

Daily Sabah economist Cemil Ertem said that with the framework deal that has been reached concerning Iran nuclear power, it is highly possible that Iran will become one of the natural gas suppliers of the TANAP and the TAP. With the integration of the routes, developments will benefit Turkey. "Postponing the opening a new energy chapter for Turkey is to the detriment of the EU. While Turkey becomes the hub of natural gas, even if we exclude Russia, the EU has no other option to sustain its energy supply security other than Turkey," Ertem said.