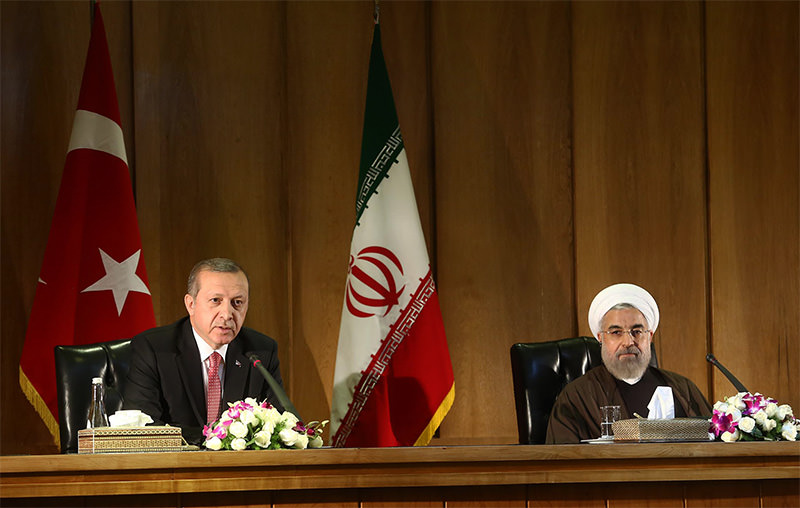 Turkey expects lower prices for natural gas from Iran, local currencies will be used to avoid exchange rate pressure and the removal of sanctions are estimated to help reach $30 billion trade volume target

President Recep Tayyip Erdoğan stated that Turkey purchases the most expensive natural gas from Iran, which should be lowered in accordance with the trade volume target of the countries.

The Turkish president paid an official visit to Iran yesterday to attend the Second Turkey-Iran High Level Cooperation Council with six ministers in Tehran, where he met with his counterpart Hassan Rouhani. After meeting, the two leaders held a press conference, following which eight new deals were signed by ministers of the two countries.

The Iranian president thanked Turkey for its support of Iran during the nuclear deal discussions. Rouhani said he believes when the sanctions on Iran have been removed, trade between Turkey and Iran will reach the desired level of $30 billion faster, and investments will increase. The commissions will continue to work on solving the problems of trade between Iran and Turkey.

Erdoğan pointed out that although Turkey and Iran follow a growing trend on trade volume, it was lower than expected in the years of 2013 and 2014. Turkish exports to Iran were $3.9 billion in 2014, while imports were $9.8 billion and the balance was of benefit to Iran.

The Turkish president stressed that Turkey purchases almost 90 percent of Iran's natural gas, but that Iran's price is the highest compared to other suppliers. Erdoğan talked about Turkey's growing natural gas demand with an expending distribution network and said Turkey works to diversify its supply chain. "We have to offer our citizens better prices," said Erdoğan, and added that energy cooperation with Iran will continue, but that Turkey also expects lower prices from Iran. Erdoğan further stated that if the prices are reduced, Turkey will buy larger amounts of natural gas from Iran. "However, our main focus should be other products to increase our trade volume to $30 billion," said the Turkish president.

Using local currencies was also an important point of the talks. The countries agreed on using their own currencies for trade, but there are difficulties in implementing this plan. Erdoğan said that this point is significant if the two countries wish to avoid exchange rate pressure. "Iranian businessmen should pay with Turkish lira for their purchases in Turkey and it should be the same for Turkish businessmen in Iran. This way, we can lower the pressure of the dollar or euro," said Erdoğan. The central banks are working to develop a system to be used for transactions, which have yet to produce results.

According to official data released by the Turkish Statistical Institute (TÜİK), trade volume between Turkey and Iran was at its highest in 2012 with $9.9 billion exports and $12 billion imports. But, after 2012, trade between the two countries showed a downward trend due to the impact of the Syrian conflict in the region. In 2013, exports to Iran were $4.2 billion and imports $10.4 billion. Despite the sharp decrease in exports, imports were not influenced in the same way because of the natural gas imported from Iran. Iran is on the list of targeted countries (in terms of increasing trade volume) of the Turkish Economy Ministry for the years 2014 and 2015.
Last Update: Apr 08, 2015 1:15 pm
RELATED TOPICS