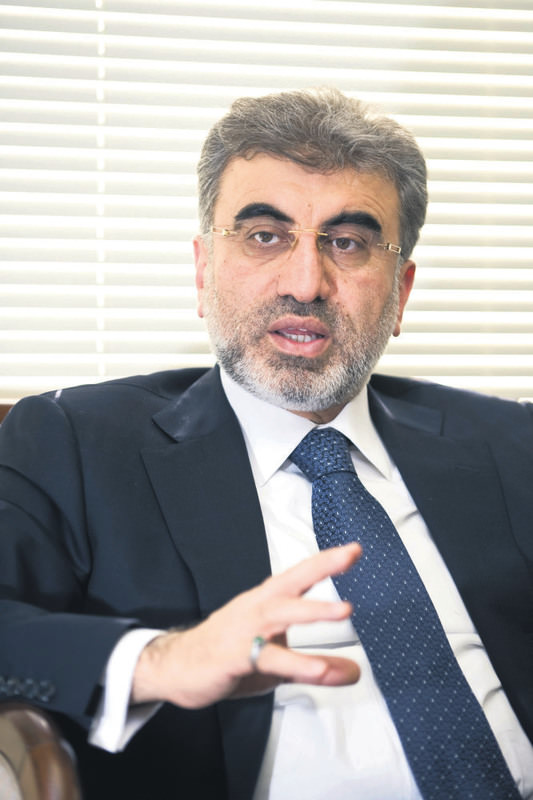 Economic growth increases the need for energy, especially if growth is production-based. Energy consumption is now a bigger challenge than it has ever been in Turkey

As an energy-dependent country, Turkey's energy consumption grows as the economic figures increases. Turkey has averaged 6 percent growth since 2010, and energy holds the highest share of imports, which totals 25 percent on average and increases the current account deficit - one of Turkey's chief economic problems. To shed light on this ever-growing and important sector, Daily Sabah and Oxford Business Group discussed Turkish energy policies regarding sustainability and diversification with Energy and Natural Resources Minister Taner Yıldız.

Daily Sabah and Oxford Business Group: A natural consequence of a robust and growing industrial manufacturing base is that it will consume more energy. As some of Turkey's energy rich neighbors find themselves in precarious positions, is Turkey expanding its scope to guarantee long-term energy security? Moreover, importing the bulk of the country's energy needs is having a significant impact on the current account deficit, with sources citing 25 percent of the country's imports. Is there a plan for reducing the debt burden from energy imports as well as ensuring greater diversification in Turkey's energy portfolio?

Taner Yıldız: In parallel with its booming industry and economy, Turkey's energy consumption is constantly increasing. We predict that our energy consumption, which has been 255 billion kilowatt hours (kWh) as of late 2014, will reach 500 billion kWh by 2023. Likewise, our projections indicate that current electricity installed capacity of 69,682 megawatts should be upgraded to 110,000 megawatts by 2023. We work hard to achieve this objective and, within this framework, we are activating our domestic and renewable energy resources, which are of great importance for us. For instance, 2014 was a year in which the greatest installed wind power capacity was put into use. With the introduction of wind power plants, we have saved $850 million by cutting natural gas imports. For the first time, the share of wind power's installed capacity has exceeded 5 percent. We expect 10 percent of electricity consumption from wind power plants will be met soon. Additionally, for the first time, solar energy production and unlicensed electricity generation started in 2014, which have a share in installed capacity. Tenders of multiple applications have started and licensed solar power plants generating 330 megawatts have been sold by tenders as well. We aim to add 3,000 megawatts to the current capacity, which corresponds to a TL 1.7 billion ($645.5 million) investment. We are also planning to bring at least two nuclear power plants into operation and start the construction of a third one by 2023. The Environmental Impact Assessment (CED) report for the Akkuyu Nuclear Power Plant has been approved. We will lay the foundations of the Akkuyu project in March. The Host Government Agreement of the Sinop Nuclear Power Plant will be brought to the general assembly of Parliament soon. With the nuclear power plants, which have an investment value of $42 billion, we will reduce natural gas imports by $7.2 billion a year with the total installed capacities of 4,800 megawatts and 4,480 megawatts of the Akkuyu and Sinop plants, respectively. Thus, Turkey will not have difficulty in medium- and long-term energy supply. Over the past 12 years, Turkey has seen more investments than were made in the entire 100 years prior. We aim to redouble these investments and increase the share of renewable energy resources to at least 35 percent by 2023.

DS & OBG: Turkey is known as a key transit state to one of the most active energy corridors in the world, but can you shed light on potential indigenous resources within Turkey? To what degree exploratory activities are taking place?

TY: In 2014, the public and private sectors drilled 1.5 million meters in different mines. We completed drilling activities in great fields, including Afsin-Elbistan, Karapinar-Ayranci, Eskisehir-Alpu and Afyon-Dinar, gathering 15 billion tons of lignite reserves. With an investment of $30 billion, we aim to establish power plants with a total power production of 17,500 megawatts in these fields. To this end, in 2015, we will establish a model to produce energy using the Afsin-Elbistan, Karapinar-Ayranci, Eskisehir-Alpu and Afyon-Dinar reserves. In 2014, we produced 2 million tons of boron and sold $910 million worth of it, making a profit of TL 1 billion ($380 million). Additionally, we are quite eager to engage in oil and natural gas exploration activities. In 2014, the public and private sectors invested $1.1 billion in oil and natural gas exploration. The Turkish Petroleum Corporation (TPAO) and Royal Dutch Shell will soon begin new drilling activities in the western Black Sea as well.

TY: Turkey officially became a party to the United Nations Framework Convention on Climate Change and to the Kyoto Protocol in 2004 and 2009, respectively. Although Turkey had not been under the Carbon Emissions Reduction Obligation of the Kyoto Protocol until 2012, the development of energy efficiency, the evaluation of potentials, the greater use of renewable resources, the extension of the use of clean coal technologies and the inclusion of nuclear energy in the electricity production portfolio are our primary policies in addressing the problems inherent to energy and environment. To this end, our studies on the following topics are ongoing:

l Conducting and promoting national and international studies to minimize the pollution caused by energy resources.

l Creating policies on climate and energy - following the emission trade that is being conducted in the EU and the world - evaluating the issue of domestic and sectoral emission trade, launching necessary activities in line with it and harmonizing the ministerial policies with national and international climate change and low-carbon development policies.

Searching for the impact of environmental policies on energy investments.