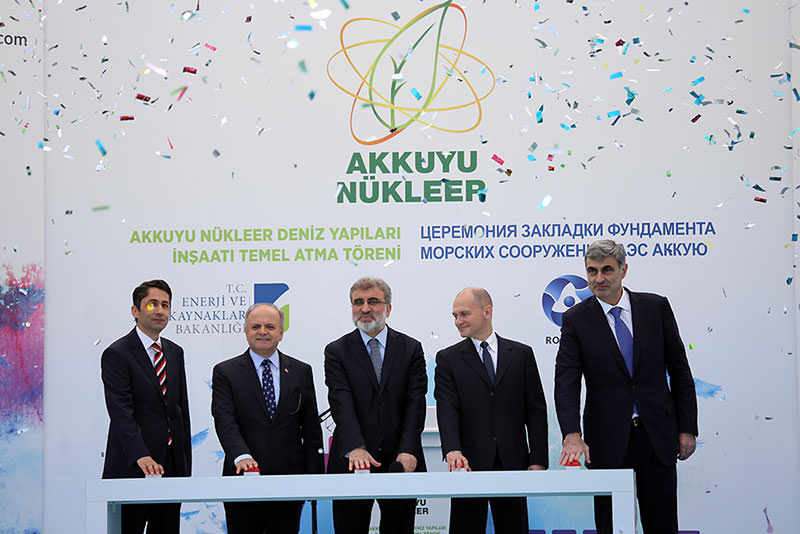 Construction of the Akkuyu Nuclear Power Plant, the first of three to be built in Turkey, has begun in Mersin. The plant will help Turkey cover its electricity needs, saving a large amount on energy imports

Turkey launched the construction of its first nuclear power plant, a $20 billion project, for greater energy self-sufficiency on Tuesday. The nuclear power station in Akkuyu in the southern province of Mersin is being built by Russia's nuclear agency Rosatom.

"Development cannot take place in a country without nuclear energy," said Turkish Energy Minister Taner Yıldız at a ceremony attended by the head of Rosatom, Sergei Kiriyenko and other top officials.

It is the first of three nuclear power plants Turkey currently plans to build to reduce its dependence on importing energy from exporters such as Russia and Iran. A second plant is due to be built by a French-Japanese consortium in the northern Black Sea city of Sinop, while a third plant, the location of which is yet to be finalized, is also planned.

"If we had built this power station 10 years ago, we would have saved $14 billion in natural gas purchases," said Yıldız, adding that if the Akkuyu plant had been operating now, it would cover the electricity needs of Istanbul, which has a population of 15 million, and would be satisfying 28 percent of electricity demand in Turkey.

Yıldız and Kiriyenko laid the foundation stone for the construction of the power station, which is expected to be completed by 2020 and will have four power units with a capacity of 1200 MW each.

The Turkish authorities said that the Akkuyu facility can resist earthquakes registering up to nine on the Richter scale.

Pointing out that 11 percent of electricity production in the world comes from nuclear power plants, Yıldız said that this rate is around 19 percent in Russia and the U.S., 16 percent in Germany, 78 percent in France.

Yıldız emphasized that the accidents that occurred in Fukushima and Chernobyl were the turning points for the nuclear plant technology in the world. "All learned their lessons from the Fukushima accident. Likewise, Akkuyu Nuclear Power Plant also learned its lesson. The issue of security systems comes first compared to all other structures," said Yıldız.

In addition to saying that Japan had to pay an extra $40 billion for energy since it was not operating its nuclear power plants last year, Yıldız said that Germany continuing to operate its nine plants despite saying that it would shut down all of them, and Japan re-opening its plants is an important point to take into consideration in the big picture.

$22 billion investment in a 2-kilometer area

Yıldız said that Turkey's coastline is 8,484 kilometers long and $22 million will be invested in Akkuyu, where the first nuclear power plant of Turkey is being constructed in a 2-kilometer area.

Against claims that the nuclear power plant will repel tourists from Antalya and Mersin, Işık said that there are seven nuclear plants within a 90-kilometer circle draw around Paris and the same goes for London and Madrid as well.

Yıldız further underlined that while Akkuyu is not in an earthquake zone, the plant will be built to withstand earthquakes up to a magnitude of nine.

About 10,000 people will be employed at the plant, and the Energy Minister said that the one-and-a-half year delay was due to security reasons. "We wanted to include all the new advances in technology," he added and thanked everyone who supported and worked for the project and thanked the Turkish president and prime minister for their support as well.

Speaking at the ceremony for laying the foundations of Akkuyu nuclear power plant's water structures, the General Manager of the Russian firm Rosatom, Sergey Kirienko said that they want to collaborate with Turkish firms not only in Akkuyu but also in third countries. He also said that they will get in contact with the second and third firms included in the tender for the nuclear power plant.

"A new technology has been invented after the Fukushima disaster. If the technology we are bringing here was there when the earthquake happened, the disaster would have been averted. This is a tested, approved and state-of-the-art project," added Kirienko. He also said that the plant is ready for unexpected situations and they will strive to build the most modern, safest and effective plant in Turkey.

The nuclear power plant to be constructed in Akkuyu will consist of four units, each of which will be able to generate 1,200 megawatts of power. The power plant, which is being constructed by Russian state-run atomic energy corporation Rosatom, is expected to produce approximately 35 billion kilowatt-hours of electricity per year after its construction is completed, and its service life is expected to be 60 years.

A group of protesters against the nuclear power plant gathered outside the entrance door of the construction area at the inaugural ceremony. They were not allowed inside but they blocked anyone leaving.

They did not obey police's orders and therefore, the police used pressurized water to split up the group. The group gathered in front of the door again afterwards but they agreed to depart upon being warned by Provincial Gendarme Commander Coronel Ömer Uyan.