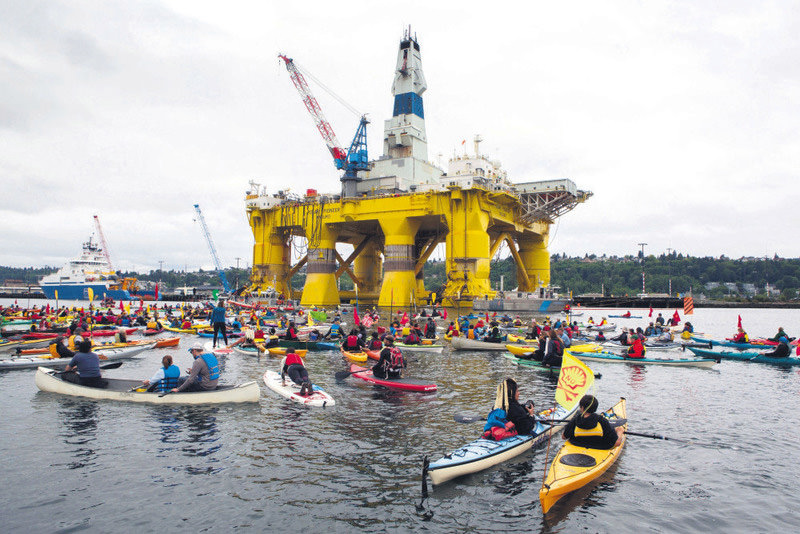 Activists in kayaks, who oppose Royal Dutch Shell's plans to drill for oil in the Arctic Ocean, approach Shell's Polar Pioneer drilling rig docked in Elliott Bay, next to the Port of Seattle's Terminal 5, during the ,Paddle in Seattle, protest
by Associated Press May 17, 2015 12:00 am

After the first of Shell's two massive oil rigs arrived at the port, hundreds of activists in kayaks and small boats fanned out on a Seattle bay to protest plans by Royal Dutch Shell to resume oil exploration in the Arctic

Hundreds of activists decked out in neoprene wetsuits and life jackets took to the water off Seattle in kayaks, canoes, paddleboards and other vessels to send the message that Royal Dutch Shell should cancel its plan to drill in the Arctic Ocean.

The "Shell No" protest was held only blocks from where Shell's Polar Pioneer drilling rig is docked. Once out on the water, kayakers gathered in formation and hoisted signs and banners that read: "Climate Justice," "Oil-Free Future" and "We can't burn all the oil on the planet and still live on it." Many had posters or red scarfs that had the Shell logo with crossed kayak paddles underneath, resembling the skull-and-crossbones image. Annie Leonard, executive director of the environmental group Greenpeace USA, said there are a long list of reasons why drilling in the Arctic is a bad idea. The focus should be on renewable energy in this time of climate change, not dirty fuels, she said.

"Why would we invest in an energy source that scientists say is leading us to catastrophe?" Leonard said. Many also fear that an oil spill in such a delicate and remote region would be a disaster on many levels. Greg Huyler, a scuba diver, stood on the sidewalk and shook his head in opposition to the event. "It's a bunch of crap," he said. "The problem is, all of these kayaks are petroleum products, and they're going to gripe about drilling for oil. And 90 percent of them drove here in cars that use petroleum products."

Alli Harvey, Alaska representative for the Sierra Club's Our Wild America campaign, said: "Science is as clear as day when it comes to drilling in the Arctic: the only safe place for these dirty fuels is in the ground."

At the center of the paddle protest was the "People's Platform," a 4,000-square-foot (372-square-meter) barge powered by renewable energy, said Jonathon Berman with the Sierra Club. The platform was used as a stage for speakers, a band and a tall screen that showed images of people expressing their opposition to Shell's plans.

The Polar Pioneer is the first of two oil drilling rigs that Royal Dutch Shell plans to use this summer as it explores for oil off Alaska's northern coast. The second rig, the Noble Discoverer, is set join the Polar Pioneer at the Port of Seattle at a later date. The Arctic holds about 30 percent of the world's undiscovered natural gas and 13 percent of its oil, according to Shell's website.

"This amounts to around 400 billion barrels of oil equivalent, 10 times the total oil and gas produced in the North Sea to date," Shell's site says. "Developing Arctic resources could be essential to securing energy supplies for the future, but it will mean balancing economic, environmental and social challenges." The activists see it differently. The protesters say it's critical that they take a stand "against dirty fossil fuel projects." They want to put themselves on the front lines in the battle for Arctic oil.
Last Update: May 18, 2015 11:24 am
RELATED TOPICS