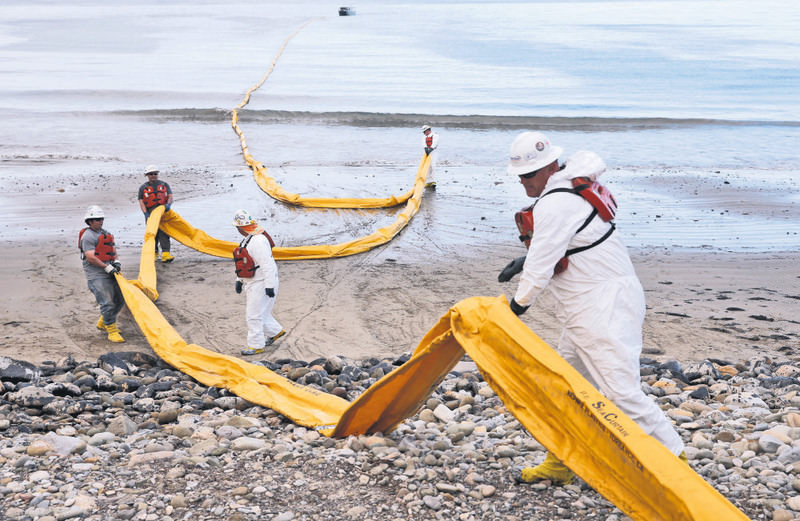 by Associated Press May 22, 2015 12:00 am
The operator of a broken oil pipeline that fouled a California shoreline says it could be weeks or even months before investigators are able to determine what caused the break and subsequent spill. Crews have yet to excavate the broken piece of pipeline, which under the law must be done in the presence of federal regulators and a third party, officials with Plains All American Pipeline LP said at a Thursday night news conference at the Santa Barbara County beach where the spill occurred two days earlier. "We have not even uncovered the pipe yet," said Patrick Hodgins, senior director of safety for Plains All American.

The company would not yet say whether two malfunctions that occurred shortly before the spill was discovered were part of the cause. The 24-inch (61-centimeter) pipe, built in 1987, had no previous problems and was thoroughly inspected in 2012, according to its operator, Plains All American Pipeline. The pipe underwent similar tests about two weeks ago, though the results had not been analyzed yet. The spill involved an estimated 105,000 gallons (397,456.liters) of crude; about 21,000 gallons (80,000 liters) is believed to have made it to the sea and split into slicks that stretched 9 miles (15 kilometers) along coast. A 23-mile (37-kilometer) by 7-mile (11-kilometer) area was closed to fishing. As of Thursday, more than 9,000 gallons (34,000 liters) had been raked, skimmed and vacuumed up, officials said.
Last Update: May 22, 2015 11:37 pm
RELATED TOPICS