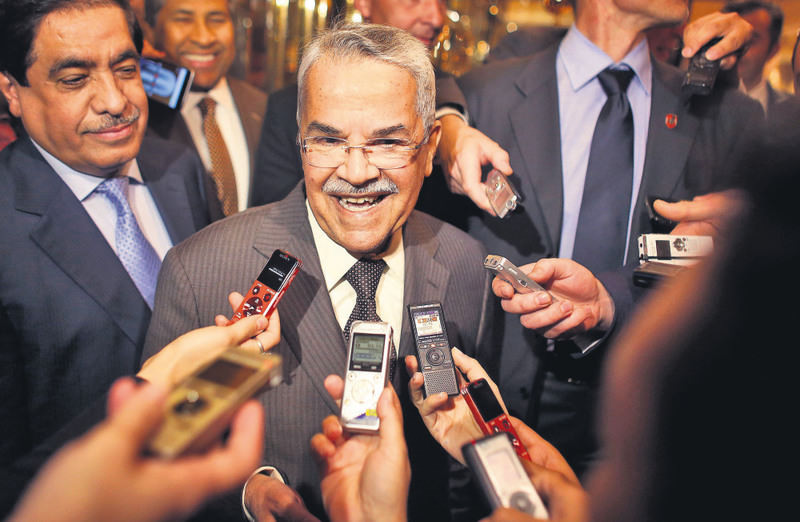 Topics such as the organization's oil production quota, its position on falling oil prices, the state of Iran and the U.S.'s increasing oil production stand out as the major topical issues ahead of the OPEC meeting

All eyes are on today's meeting that will be held by the Organization of the Petroleum Exporting Countries (OPEC). The meeting, which will be held in Vienna today, will be the second ordinary meeting of OPEC since oil prices started to drop in June 2014. Last November, OPEC decided not to cut oil production, setting an average daily production quota of 30 million barrels for six months. With Saudi Arabia and Iraq increasing their oil production, the quota was exceeded and average daily production exceeded 31 million barrels in the recent period.

OPEC has not held an emergency meeting over plummeting oil prices, while seven out of its 12 members expect that the amount of oil production will be reduced. Four member countries, including Saudi Arabia, do not want the organization to cut the production quota, while one member has yet to disclose an opinion.

According to the data compiled by Anadolu Agency regarding the expectations and demands of member countries from the meeting, Venezuela, which is largely dependent on oil exports in its economy and had an average daily production of 2.7 million barrels of crude oil in April, wants a cut in oil production. The Venezuelan foreign minister and oil minister were backed by Iran when they visited the country in April 2015. Venezuelan President Nicolas Maduro said that the U.S.'s rising shale gas production was responsible for rock-bottom oil prices in a January statement.

While supporting Venezuela, Iran also asks for a quota increase from OPEC. If nuclear talks are finalized successfully, Iran aims to increase its oil production, which dropped to a daily average of 2.6 million barrels after sanctions. If this is realized, Iran can also increase its oil exports. Iran's minister of petroleum, Bijan Namdar Zangeneh, said that they sent a letter to OPEC, demanding an increase in the oil production quota.

During a meeting held in March, Angola, Algeria and Nigeria announced their demand to develop a common strategy against falling oil prices, while Libya and Ecuador want OPEC to cut back on the amount of production so that prices can go up. These five countries had an average daily production of a total of 5.7 million barrels of crude oil in April.

Iraq has been reaping the fruits of its investments in the oil sector in recent years. Among all OPEC members, Iraq has achieved the highest increase in oil production over the past year, producing 3.67 million barrels of crude oil on a daily basis in April. It is expected to improve its oil production further. Iraqi Minister of Oil, Adil Abdul-Mahdi, said that the rise of the price of oil per barrel from $75 to $80 would stabilize the market.

The United Arab Emirates, Kuwait and Qatar don't want OPEC to reduce oil production claiming that they would lose their market shares in such a case. Those countries continue to be allies of Saudi Arabia, the largest crude oil producer within the organization. These three countries produced 6.4 million barrels of crude oil on a daily average in April.

The Saudi Arabian Minister of Petroleum and Mineral Resources Ali bin Ibrahim Al-Naimi said in his statement in December 2014 that "Whether it goes down to $20, $40, $50, $60, it is irrelevant. We are going to continue to produce what we are producing, we are going to continue to welcome additional production if customers come and ask for it." Naimi also said that countries outside OPEC were responsible for the reducing oil prices. In addition to protecting its market share by increasing its oil production despite low prices, Saudi Arabia also managed to increase its market share by making discounts in oil prices every month that it exported to Asian countries such as China and India. Saudi Arabia reached a record production level by increasing daily crude oil production to 10.3 million barrels in April.

Being one of the oil producer countries outside OPEC, Russia's export revenue has declined in half shares over the last one year due to the low oil prices. Trying to protect its 10.7 million barrels daily production, Russia is having difficulty in attracting foreign capital to its oil sector because of the sanctions of Western countries. Russia has attempted to develop a strategy against falling oil prices with many OPEC countries including Saudi Arabia in the recent months, but it has not managed to get positive results.

The U.S., which has doubled its oil production due to the rock oil revolution in 2008, produced 9.4 million barrels of oil on a daily average in the first quarter of this year. The U.S.'s increasing oil production created excess supply in the global oil market, while it caused a serious decline in the amount of crude oil that OPEC and Gulf countries imported.
Last Update: Jun 05, 2015 1:15 am
RELATED TOPICS