Delivery of gas to Europe? Not without Turkey 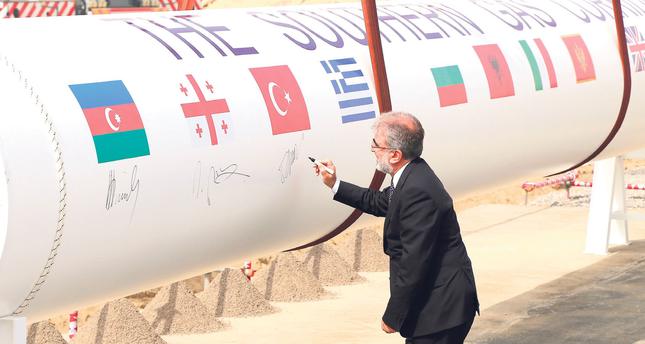 by Daily Sabah with AA Jun 09, 2015 12:00 am
Turkey has a key role due to its position at the center of routes of natural gas delivery through pipelines to international energy markets, an expert said Tuesday.

In London at the 2nd Russian Energy Forum: Finance and Investment, organized by Eurasian Dynamics and sponsored by Turkey's Anadolu Agency, Kate Mallinson, a political risk expert at the London-based international business intelligence firm GPW, spoke about Turkey's energy role in the region.

Stating that Azerbaijani gas will not on its own be sufficient to diversify Europe's natural gas demand, Mallinson said Iranian gas reserves, in the future could also be supplied through Turkey to international markets. Although Iran cannot produce nor export natural gas at optimal levels because of sanctions, this may change should these be lifted.

"For Europe, energy security is the second top priority after the crisis in Ukraine. Turkey and Europe will gain 16 billion cubic meters of gas with Azerbaijan's Shah Deniz II field. However, this only accounts for 10 percent of Europe's total gas need. So, new resources have to become available."

When TANAP's first phase is completed in 2018, it will have an initial capacity to carry 16 billion cubic meters of gas per year from Azerbaijan's Shah Deniz II field through Georgia and Turkey to Greece and then further into Europe.

Turkmenistan has been considering the delivery of its natural gas to the west through the proposed Trans Caspian Gas Pipeline, a planned project which would run under the Caspian Sea to reach Azerbaijan. From Azerbaijan, the Turkmen gas may then be delivered to Georgia, connect to TANAP in Turkey, and reach Greece.

While Europe imports around 30 percent of its gas from Russia, the recent tensions over Crimea in Ukraine also poses a risk for EU for secure gas supplies from Russia.

If realized, Turkish Stream and TANAP projects will make Turkey a transit country to deliver natural gas from Russia, Azerbaijan, and perhaps even from Turkmenistan and Iran, to Europe.

Experts believe that the TANAP project has great importance in terms of Europe and Turkey's energy security. The pipeline is planned to pump 16 billion cubic meters (bcm) of gas per year, 6 bcm of which will be designated to Turkey's domestic consumption.

TANAP project managers say that the pipeline will transfer 31 bcm of gas and Turkey - the ninth biggest gas importer by 45 bcm per year - has a right to increase its share to 21 bcm per year when the pipeline starts to function with full capacity by 2023. Energy specialists forecast that Turkey's total gas consumption will reach 70 bcm per year in 2020.