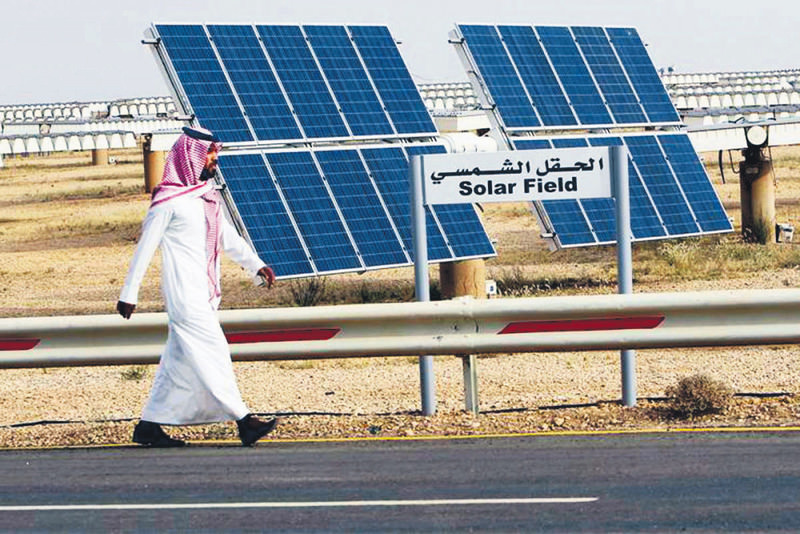 A Qatar-based renewable energy company, Qatar Solar Energy launched the largest facility for the development and manufacture of solar energy panels in the Middle East and North Africa.
by Daily Sabah Jun 12, 2015 12:00 am

Qatar's ambitious plans to diversify its energy supplies have taken a huge leap forward thanks to ground-breaking new research into solar power.

The Qatar Environment and Energy Research Institute (QEERI), a Qatar Foundation for Education, Science and Community Development (QF) national research institute, has discovered the chemical secrets of a new material that could make the generation of solar energy far more economical, and finally unleash the potential of this abundant renewable resource according to Arabian Business.The breakthrough is ultimately expected to contribute to QF's mission of building Qatar's innovation and technology capacity, ensuring the sustainable development of energy that will benefit this country, as well as the rest of the world, a statement said. According to scientific experts, the natural power of the sun supplies the Gulf state with the annual equivalent of 1.5 million barrels of oil per square kilometer.

However, much of this goes to waste. The high cost of harvesting the latent energy has made it an unattractive investment for "traditional" energy companies, and it has become a major obstacle to Qatar in realizing its ambition of generating a fifth of its energy needs from renewable resources by 2024.

Now QEERI, which has taken a leading role in energy and water security research in the region, may well have come up with a solution that will lead to less reliance on oil and gas in the future.

Dr Mohammed Khaleel, QEERI's executive director, said: "This country's rapid population and economic growth has led to ever-increasing demands for electricity. Without steps to secure additional sustainable energy sources, and to reduce consumption, the economy and the environment will be adversely affected within the next few years.

"For this reason we are continuing to focus our efforts on harnessing the power of the sun - Qatar's most abundant natural resource - as we develop new energy solutions for this country and the region as part of our continued support of the Qatar National Vision 2030."

The research, which has been conducted in tandem with AMBER, a research center funded by Science Foundation Ireland (SFI) and jointly hosted by Ireland's Trinity College Dublin (TCD) and the Centre for Research on Adaptive Nanostructures and Nanodevices (CRANN), has looked specifically at a newly discovered material called perovskite. Perovskite, which is crystal-like in form, has excited the scientific world since its discovery in 2012, due to the fact that it is a cheaper, and potentially more effective, alternative to silicon, one of the traditional materials used in solar cells.

In just three years the mineral has made progress at unprecedented speeds, with the latest research suggesting that perovskite cells are now capable of efficiencies greater than 20 percent, a milestone which took silicon several decades to achieve.

However, perovskite's seemingly unstoppable rise has been cut short due to the material's natural instability. Even just to function, perovskites must be held in an inert atmosphere, exposed to almost no oxygen, low humidity levels, and no temperature variations. QEERI and AMBER's research has revealed important secrets about how the mineral functions and operates. Up until now, researchers have remained puzzled as to how perovskite is able to store and capture solar energy, with scientific opinion divided as to precisely what chemical process occurs naturally inside the material after it has been exposed to the solar rays.

Finally the mystery has been solved, with the QEERI and AMBER research revealing how the inorganic crystals inside perovskite are able to alter in structure following exposure to sunlight, allowing them to trap energy internally.

It is now hoped that this finding, which was recently published in the prestigious scientific journal 'Nature Communications', will help the scientific community's understanding of perovskite and bolster global research efforts to address the mineral's innate stability issue. The research, which took years to complete, was done by using advanced computer modelling and simulation tools, a process that involves creating and analyzing a prototype of the material to predict its performance in the real world, and focusing specifically on the electronic properties of these materials.

Speaking about the future of perovskite, AMBER's Professor Sanvito, who is also Professor of Condensed Matter Theory at Trinity's College of Physics in Dublin, Ireland, said: "Every hour, the sun releases on Earth as much energy as that used by the entire planet in one year.

"Harvesting such an enormous amount of energy in an efficient and cost-effective way would mean abundant green energy for the entire human race. Developing and improving our knowledge of solar energy harvesting is crucial. This is an exciting discovery. "Now that we understand how these new materials work, we can design new compounds to use for solar energy harvesting at cheaper costs than silicon solar cells."
Last Update: Jun 12, 2015 9:48 pm
RELATED TOPICS