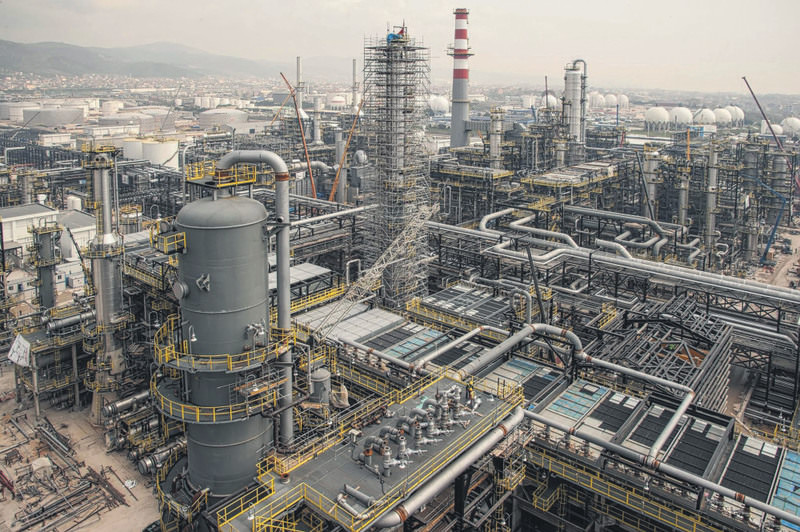 by Anadolu Agency Jun 22, 2015 12:00 am
Turkey's energy giant TÜPRAŞ was named the country's export champion in 2014, while partnering foreign carmakers dominated the "top 10" list of leading exporters, according to a survey by the Turkish Exporters' Assembly (TİM).

The company exported $3.7 billion worth of petroleum products last year, down from $4.1 billion in 2013 and $5.42 billion in 2012. The energy giant captured a 56.4-percent share of the petroleum products market, excluding industrial products in Turkey. The company had a market share of 88 percent in jet fuel and 37 percent in diesel. In gasoline, almost all of the demand was met by TÜPRAŞ. The top 10 Turkish exporting companies included four automotive, two household appliance-makers and one export services company. One gas producer, German industrial conglomerate Bosch, ranks among them.

An award ceremony was organized by the Turkish Exporters Assembly on Sunday, attended by President Recep Tayyip Erdoğan along with several cabinet ministers including Economy Minister Nihat Zeybekci, who is responsible for Turkey's foreign trade.

On the top 10 list, car makers Ford and Oyak Renault, a joint venture between French carmaker Renault and Turkish company Oyak, followed oil refinery company TÜPRAŞ. Vestel, one of Turkey's leading durable consumer goods makers, was in fourth place. Kibar Foreign Trade, which exports the products of a number of private and state industrial enterprises and also imports raw materials for them, took the fifth spot in the country's export champions list.

Toyota Automotive took the eighth place, while Habaş, an industrial gas producer and Bosch, the industrial conglomerate, came in ninth and 10th respectively. Turkey's exports increased some 4 percent in 2014 reaching $157.6 billion, according to the TİM. Exports from car sales reached $22.3 billion, followed by textiles and chemicals. Germany with $14.9 billion, Iraq with $10.7 billion, the U.K. with $9.7 billion, Italy with $7 billion and France with $6.4 billion topped the list of top markets.
Last Update: Jun 22, 2015 11:35 pm
RELATED TOPICS