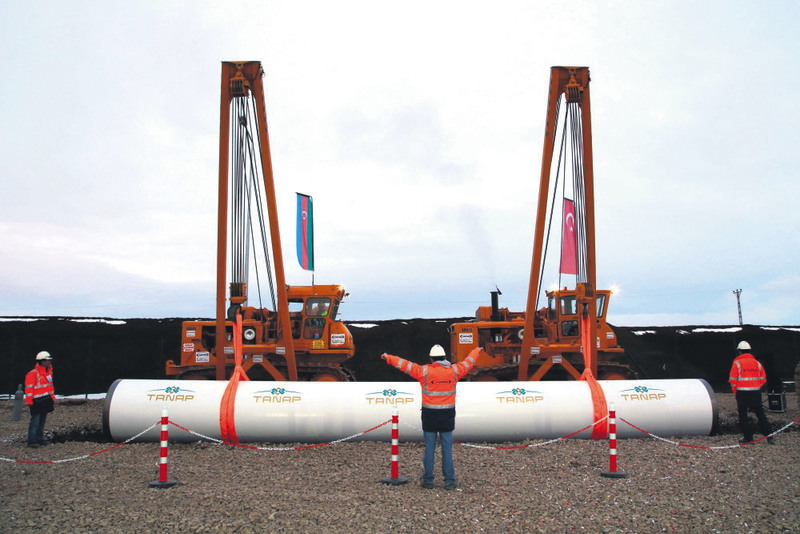 by Daily Sabah Jun 23, 2015 12:00 am
Six companies have been invited to the Trans Anatolian Natural Gas Pipeline Project's (TANAP) offshore and optical fiber cable engineering, purchasing and building operations auction. The TANAP project will deliver natural gas originating from the Shah Deniz 2 gas field in Azerbaijan to Europe after passing through 20 cities in Turkey and 1,850 kilometers of pipeline, with 19 kilometers under the Sea of Marmara. The companies and associations that qualified for the TANAP auction were Italy's Micoperi, Russia's MRTS and Turkey's Fernas İnşaat joint venture, Italy's Saipem, Singapore's Swiber Offshore, Malaysia's TL Offshore and the United Arab Emirates' Valentine Maritime.

TANAP's groundbreaking ceremony was held last March in the northeastern Turkish city of Kars with the attendance of the presidents of Turkey, Azerbaijan and Georgia. The gas is expected to begin flowing through TANAP in 2018. The pipeline's transport capacity, which will initially be 16 billion cubic meters per year, will be gradually increased, first to 24 billion cubic meters and then to 31 billion cubic meters.

TANAP, estimated to be worth more than $10 billion, is a highly anticipated project since it will reduce Europe's dependency on Russian natural gas, and is important for covering Turkey's growing demand for natural gas.