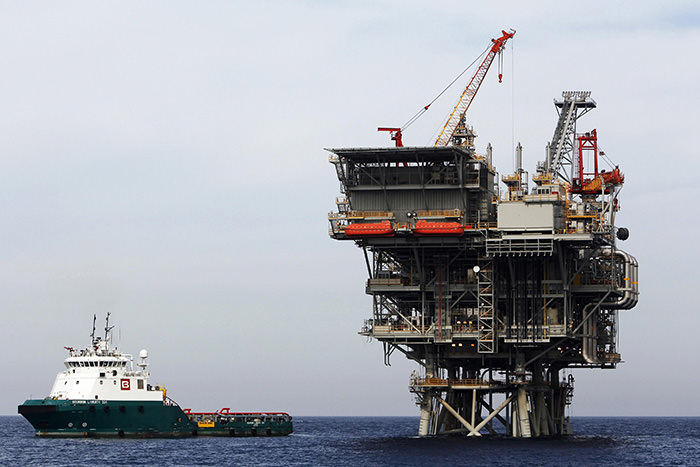 An offshore platform, which produces newly discovered Israeli natural gas, is seen in the Mediterranean sea, west of the port city of Ashdod in this February 25, 2013 (Reuters Photo)
by Daily Sabah with Agencies Aug 13, 2015 12:00 am
Israel says it has reached an agreement with developers on a regulatory framework for its natural gas reserves on the Mediterranean Sea, which would likely become a matter of dispute among littoral countries in the eastern Mediterranean, including Turkey.

The agreement comes after months of squabbling that began last year when Israel's antitrust commissioner considered designating the American-Israeli partnership that is developing as gas monopoly.

The deal sets a price ceiling for future sales to Israeli companies and commits the gas firms to complete the development of the country's largest gas field, known as Leviathan, by 2020.

Israeli Prime Minister Benjamin Netanyahu welcomed the agreement at a press conference on Thursday. The deal will be brought to a Cabinet vote on Sunday.

Critics say the deal bows to the gas firms' demands and does not do enough to protect Israeli consumers.

The deal has been an issue of concern also for Turkey due to the ongoing dispute between the Greek and Turkish Cypriots. Greek Cyprus currently negotiates with countries like Israel and Egypt to explore and extract oil from the fields in eastern Mediterranean, leaving Turkey and Turkish Cypriots out of the scheme.

The benefits of natural resources in the eastern Mediterranean has become a matter of dispute. Turkey argues that the benefits should be shared with the Turkish Cypriots, and any move to explore and extract oil from the area should be made following the resolution of the Cyprus question. The drills will be on international waters, while the foreseen facilities will be on the territory administered by the Greek Cypriots.

Greek Cypriots say Turkish Cypriots can share the potential benefits of energy exploration, but only when there is a peace deal. Turkey alleges that Greek Cypriots are exploiting the island's natural resources for their own gain.

The island of Cyprus has been on Turkey's agenda for a long time as Greek and Turkish Cypriots met at the negotiation table last year in an attempt to reunite the island for good.

The negotiation talks were stalled after an oil exploration crisis erupted on the island and Greek Cyprus left the negotiation table when Turkey sent the Barbaros survey vessel to the area where Greek Cyprus was to conduct exploratory drilling for oil and gas. Greek Cypriot moves have also lead Turkey to increase its naval presence in the region.

The ongoing dispute on the island started in the 1960's when a Treaty of Guarantee was signed between Turkish and Greek Cypriots over the island along with the British government.

The treaty stipulates that Cyprus would not participate in any political or economic union with other states, but three years later, Turkish Cypriots were ousted by force from all bodies of the new republic by Greek Cypriots.

Later, Greek Cyprus claimed to be the representative of the island calling itself the Republic of Cyprus, which is not recognized by Turkey. All efforts by the international community to end the dispute between 1964 and 1974 failed. When the Greek side tried to annex the island in a coup in 1974, a Turkish peace mission was launched in accordance with the 1960 treaty to prevent it from happening.