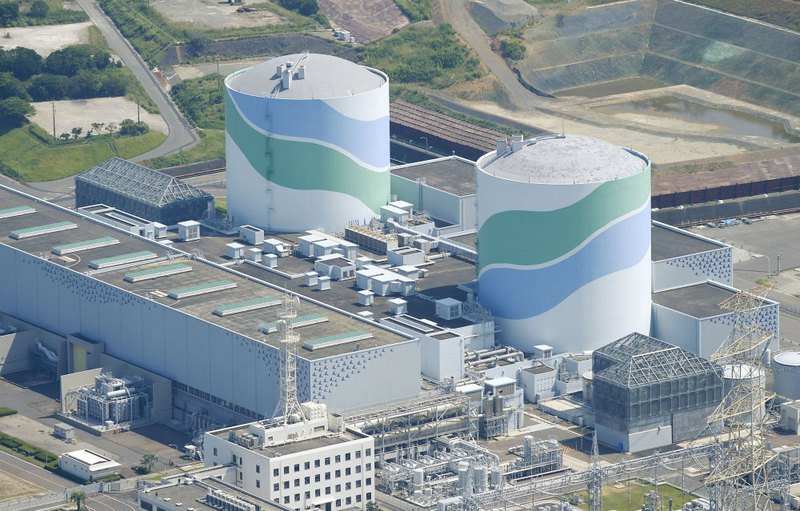 The reactor buildings of the Sendai Nuclear Power Station in Satsumasendai, Kagoshima prefecture, Japan. Japan switched on a nuclear reactor for the first time in nearly two years on Tuesday.
by Ali Ünal Aug 22, 2015 12:00 am

Last week, Japan restarted a reactor at the Sendai Nuclear Power Plant after it had been shuttered for four years and more reactors are expected to be reactivated in the coming days. The fact that Japan is choosing to return to nuclear energy as a country that has suffered the most from it, is easing security concerns of the nuclear era. The situation also boosts nuclear ambitions of emerging countries such as resource-poor Turkey.

In March 2011 following a 9 magnitude earthquake, a 15-meter tsunami disabled the power supply and cooling of three Fukushima Daiichi Nuclear Power Plant reactors, causing a reactor meltdown in Fukushima. After the Fukushima disaster, Japan took offline all 54 of its reactors, which produce 27 percent of Japan's electricity as regulators re-evaluated safety rules. This nuclear disaster is considered in the world energy market as an end of the "nuclear renaissance," a term that has been used since 2001 to refer to a possible nuclear power industry revival driven by new concerns about meeting greenhouse gas emissions limits.

Despite this setback, nuclear power capacity worldwide has continued to increase steadily and today there are some 437 nuclear power reactors operating in 31 countries with combined capacity over 11 percent of the world's electricity. There are also currently over 60 reactors under construction in 15 countries and the International Energy Agency (IEA) predicts that the percentage of nuclear power in the global power mix will increase in coming years. Turkey's energy demand has been growing with the country's economic figures. The government employs a production-based economic policy, which increases energy consumption. The lack of natural resources in the country forces the government to diversify energy supplies and work for different options to satisfy demand with local investments.

Turkey imports most of its energy, including 98 percent of its natural gas and 92 percent of its oil. The country has had plans for establishing nuclear power generation since 1970. In 2011, the Russian state-run atomic energy corporation Rosatom signed an agreement with the Energy Ministry to build and operate a nuclear power plant. According to the intergovernmental agreement between Turkey and Russia, the construction of the Akkuyu nuclear power plant was planned immediately, which required a $22 billion investment. However, the construction of Akkuyu began four years later in May 2015.

There has been preparatory work since 2008 for a second nuclear power plant, and in April 2015 Parliament ratified an intergovernmental agreement with Japan to construct the second plant in Sinop, located on the Black Sea coast. For the Sinop plant, the country will cooperate with Japan and France and the construction is scheduled to start in 2017. This plant will produce 40 billion kilowatt hours of electricity per year with four reactors.

In addition to these two plants, Turkey also intends to build a third nuclear power plant by 2018 or 2019. Even though there is no final decision about the location of the third plant, Turkey's atomic energy agency has already identified two locations, İğneada in Kırklareli province and Akçakoca in the Black Sea region. Last November, Turkey signed a technology cooperation agreement with China's State Nuclear Power Technology Corporation (SNPTC) and the U.S.-based Westinghouse and began exclusive negotiations to develop and build a four-unit nuclear power plant in Turkey.

There are 437 nuclear power plants in the world and half are located in the U.S., France and Japan. The Fukushima Daiichi Nuclear Power Plant disaster failed to squelch discussions about the cost-benefit balance of nuclear power. As a resource-poor country, Turkey has always had to find ways to cover its energy demand, and the country has chosen nuclear power along with renewable energy projects.
Last Update: Aug 22, 2015 10:41 am
RELATED TOPICS