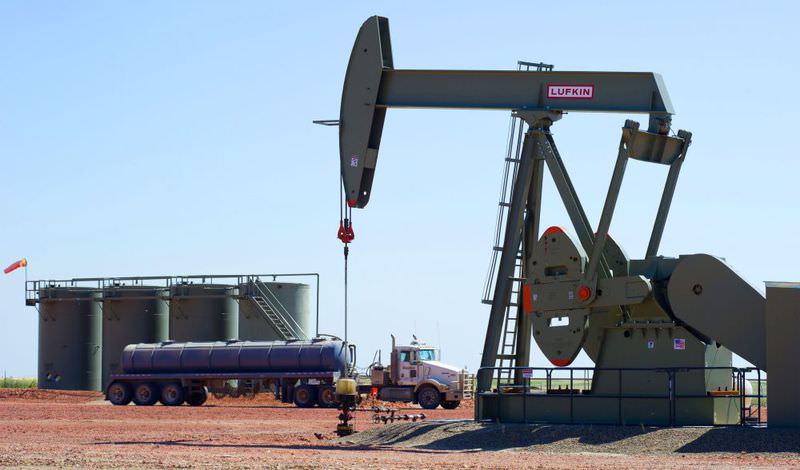 US crude oil prices continued to fall on Monday, diving below $40 a barrel to their lowest level since 2009, amid a global market selloff sparked by fears of China's slowdown.
by Daily Sabah with Wires Aug 25, 2015 12:00 am

OPEC's production slowdown strategy might go out the window as post-sanction Iran is preparing to boost oil exports. China's oil demand has increased as it looks to take advantage of low prices by stocking cheap oil

A barrel of U.S. crude oil fell below $40 per barrel for the first time since the end of the global economic crisis. Friday's fall, to $39.86, was just the latest indicator of a vast shift in the energy landscape over the past year. U.S. Oil bounced back a bit to close down 87 cents at $40.45, the lowest close since March 3, 2009. The price of oil has fallen for eight consecutive weeks, the longest streak since 1986. Oil is down 34 percent from its high of $61.43 this year, and 62 percent from its high of $107.26 last year. A boom in production has outpaced growth in global oil demand. The U.S. is churning out oil at a rate not seen in decades. Meanwhile, even with sharply lower prices, Saudi Arabia and other OPEC nations haven't cut production. Some of OPEC's Gulf members are concerned about the latest drop in oil prices which had not been expected, OPEC delegates said, but they see little chance of the exporting group diverting from its policy of defending market share.

Brent oil is trading near $46 a barrel, close to its 2015 low after an 18 percent drop in July, pressured by abundant supplies and concern about the health of the Chinese economy, the world's second-largest oil consumer.

Despite this, the delegates including from Gulf OPEC members who declined to be identified say China is still buying and stockpiling crude and they expect strong global demand growth should push prices back to $60 next year. "There is a concern about the health of the Chinese economy, but as numbers have shown the need to import oil is increasing, "an OPEC delegate from a Gulf oil producer said. "Oil prices will remain volatile... but they will recover, "the delegate said this month, adding that he does not expect OPEC to take any step now "due to unclarity" in the market.

Prices have more than halved since June last year. OPEC's Gulf members, relatively wealthy, are better able to cope with low oil prices than the African members, Iran or Venezuela. Led by Saudi Arabia, the Gulf members drove OPEC's strategy shift last year to allow prices to fall to discourage growth in competing supply sources. While non-Gulf members of the Organization of the Petroleum Exporting Countries have frequently expressed concern since then about the drop in prices, Gulf members have rarely voiced such sentiments. But there is no indication they expect OPEC's policy to change. "Of course everyone is concerned, but we hope by the fourth quarter the market will start recovering," a second OPEC source said, citing the end of seasonal refinery maintenance that will boost crude demand. OPEC officials reconfirmed its market-share strategy at its last meeting in June. At the time, delegates were expecting a recovery in prices towards the end of 2015, supported by expected higher global demand. But those sentiments have changed with the latest oil price drop as concern grows about the demand outlook in China. "Prices are expected to stay under downward pressure until the expected enhancement in demand next year, then they can reach around $55-60 a barrel," a third OPEC delegate said. OPEC currently expects an acceleration of growth in world oil demand next year to 1.34 million barrels per day, from 1.28million bpd this year, as well as an increase in the demand for its own crude as non-OPEC supply expansion slows. Although China's crude demand has so far remained strong as authorities take advantage of cheap oil to build up strategic reserves and consumers kept spending despite the slowing economy, there are signs of weakening, with the devaluation of the yuan potentially denting fuel imports.

OPEC delegates and industry sources say it is hard for Saudi Arabia to reverse the policy it championed, particularly at a time when both Iran and Iraq are gearing up to boost their crude exports. OPEC member Iran has the world's largest gas reserves and is fourth on the global list of top oil reserves holders. It outlined plans last month to rebuild key industries and trade relations following the nuclear agreement.

Iran is targeting oil and gas projects worth $185 billion by 2020, after reaching a nuclear deal last month with six major world powers, under which sanctions set by the United States, the European Union and the United Nations are due to be lifted. The sanctions are unlikely to be removed until next year, however, as the deal requires approval by the U.S. Congress. Nuclear inspectors must also confirm Iran is complying with the deal.

"The Gulf States are worried about the decline but there will be no change of direction unless Saudi was to lead it," an industry source and OPEC expert said. "At the moment, Saudi is still in charge and they will stick with it." Adding to the uncertainty over the health of the Chinese economy is concern about rising global oil production in a market that OPEC's own forecasts indicate is already oversupplied by more than 2 million bpd. Saudi Arabia and Iraq, OPEC's top two producers, have been pumping this year at record highs, and others like Russia have kept production levels elevated.
RELATED TOPICS