Shell president: ‘Oil will be required for a long time' 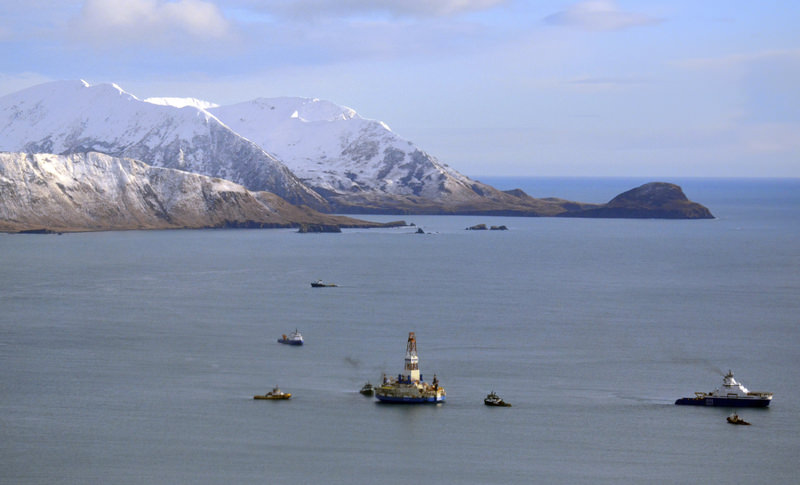 by Associated Press Sep 03, 2015 12:00 am
The president of Shell Oil Co. said Tuesday that exploratory drilling off Alaska's northwest coast is going well despite stormy weather last week that caused the company to halt operations for a few days. And in an interview with The Associated Press, Marvin Odum said he expects further protests against the company's plans for Arctic drilling like the ones in Seattle and Portland where activists in kayaks tried to block Shell vessels.

In Seattle, Shell faced protests on the water by "kayaktivists" upset over the company staging equipment in the city. In Portland, Oregon, Greenpeace USA protesters hung from the St. Johns Bridge to delay a Shell support vessel, from heading to the Arctic.

"I think the right assumptions for me to make are, it's not going to go away," Odum said. "We saw quite a bit of very public opposition when we were in the Pacific Northwest." Odum said he's "110 percent ready" to work with people who want to find ways to improve drilling.

"I do have an issue with those that oppose who use illegal means or put the safety of themselves or the safety of anybody associated with this operation at risk," he said. Odum said good progress is being made on the first well off Alaska's northwest coast.

"We had a few days in the last week where we couldn't operate because of the weather," he said. "Now we're coming out of that and it looks like we're moving into a time period of good weather." President Barack Obama this week is in Alaska rallying support for measures to combat climate change, such as limits on carbon emissions. While environmentalists praise the president for curbing greenhouse gases, they pillory him for granting Shell permission to drill in the Chukchi Sea for the first time in 24 years. The U.S. Geological Survey estimates the Chukchi and Beaufort seas hold 26 billion barrels of recoverable oil. Oil will continue to be needed as the United States transitions to more renewable energy, Odum said.

"Oil will be required for a long time," Odum said. "Let's take a really close look at developing our own resources, control how it's done and get all the benefits that go along with it."

Shell in two years of exploratory drilling and with up to six wells hopes to confirm a vast reservoir of oil. ıf it's found, Shell could apply for production permits and move oil by undersea pipe to the Alaska shore and then overland across northern Alaska to the trans-Alaska pipeline. That could take more than a decade.
RELATED TOPICS