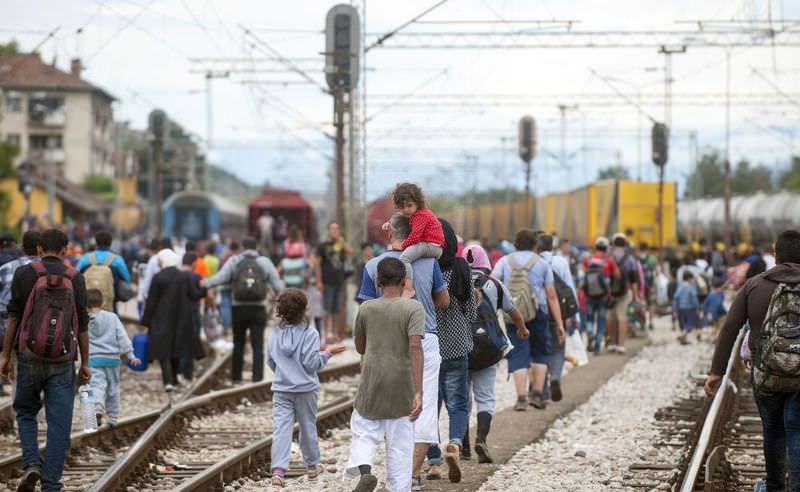 Migrants walk on train tracks towards the town of Gevgelija after breaking through a cordon of Macedonian special police forces.
by Sep 04, 2015 12:00 am

With Europe facing the biggest migrant crisis since World War 2, trucking firms complain that their business has been affected by border controls and entire supply chains would have to be rethought

Truckers caught up in Europe's migrant crisis say business is increasingly disrupted by queues and stowaways, but they are far more worried governments will step up border controls. If the border-free zone within Europe were to disintegrate or be scrapped, it would call into question not only the road haulage industry's own, time-sensitive business model but the supply chains of industries across the continent, they say. Faced with an influx of migrants, the European Union's 28-nation members have accused one another of breaking the law with ad hoc measures and failing to join forces to agree a common, workable solution.

German Chancellor Angela Merkel said on Monday that if Europe fails to agree to a fair distribution of refugees, the passport-free Schengen zone encompassing 26 European states would be called into question. For DSV, the third largest road freight operator in Europe with more than 17,000 trucks on the roads every day, that would have a serious impact that would end up fuelling inflation. "If they start to stop all the trucks it will be costly for everyone and the bill will be passed on to customers and in the end, goods will be more expensive," said Soren Schmidt, head of DSV Road.

Jack Semple, Director of Policy for the UK's Road Haulage Association said its more than 6,000 member companies were already feeling the impact in an industry built on just-in-time logistics, whether for car parts or fresh produce. Strike action by ferry workers in June exacerbated the situation by creating extra long queues.

Britain is not a party to the Schengen agreement but its companies, with parts coming and going across the continent, would still be affected if it began to crumble. "I think were Schengen to be scrapped, we're into a completely new era," Semple said. "There would have to be a rethinking of the European supply chain, stocking levels and that would obviously impact on cash flow."

Cyrille Gibot, spokesman for Dutch logistics company TNT Express, said it was looking closely at what ministers or governments might decide. "For now we're not going to speculate on what measures they could take," he said. Austria's toughening of controls along its eastern borders last week, after 71 migrants were found dead in a truck, created long queues and raised the prospect other countries may follow suit. "If that is permanent, it could spread like wildfire," said a senior European diplomat. "Schengen is under serious stress." For Jan Buczek, head of Poland's Association of International Road Transport Carriers, talk of an end to Schengen, or its gradual erosion, brings back bitter memories of the time before Poland joined.

"There were passport, document controls, crosschecks, and all of this increased the waiting time to hours at best and days at worst," he said. Buczek, who represents 5,500 companies, says there are 27,000 companies in Poland doing international road haulage, employing 200,000 drivers. "The cost of a driver-car set stands at around 200 euros a day, so it's easy to imagine how much crossing borders used to cost us monthly or annually before we joined."

Schaak Poppe, spokesman for the Dutch port of Rotterdam, Europe's largest, from which much of Germany's industrial output departs for China, said containers would be hardest hit. The situation with containers would be far more serious, since shipments went in relatively small batches of 35 by train or inland barges, he said. "Especially for trucking it would have quite an impact." A spokesman for Swiss logistics group Panalpina said 80 percent of its overland business in Europe takes place in the Schengen zone. Its abolition would mean more queues, delays, increased costs and possibly missed deadlines. "If border controls are introduced and depending on how thorough they might be, this could have an impact on our business, and also on industry as a whole," he said.