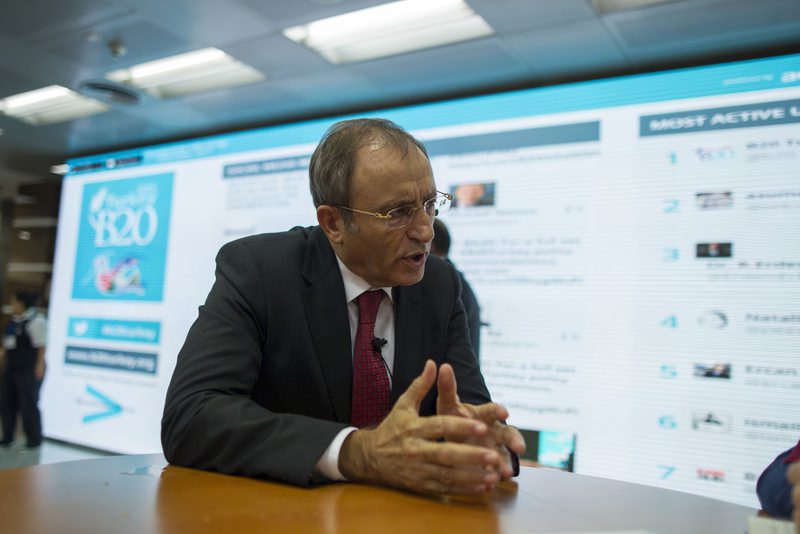 by Anadolu Agency Sep 05, 2015 12:00 am
Energy company SOCAR Turkey's executive manager, Kenan Yavuz, underlined that local discussions in Turkey are increasing people's risk perception. Furthermore, the rising terrorist attacks are preventing Turkey from becoming an energy hub. He said despite the attempts to present Turkey as a high-risk country, under current circumstances, there is no risk that would affect foreign investors.

Speaking to Anadolu Agency (AA), Yavuz said he highlighted in a speech yesterday at the B20 meeting that energy needs to be used for peaceful aims. "Here, we also need to focus on projects that support peace among countries, regions and continents," Yavuz said, and added that investment in logistics and infrastructure are of the utmost necessity to establish worldwide welfare and for resources to be distributed fairly. He also mentioned the partnership between Turkey and Azerbaijan, describing it "as leadership aiming to help build world peace."

Stating the fact that around the world, targets set for renewable energy have not been reached and underscoring the dependency on oil, natural gas and coal as well as the need for nuclear power, Yavuz said the current dependency on fossil fuels for global energy needs is 55 percent and keeps rising. He also said Turkey should strive to be more involved and active in this field, that coal should be used more efficiently and nuclear energy projects should be implemented immediately. Noting that important summits attended by many officials such as the B20 offer various opportunities, Yavuz said obstacles in the way of such summits should be eliminated.

On the current terrorist attacks in Turkey, Yavuz said any discussions that may elevate the risk perception is higher than the actual risk, and will only prevent Turkey from becoming an energy hub. He also said decreasing fuel oil prices and foreign exchange rate fluctuations do not affect economies with high production sizes, as production is what is crucial. "The growth rate was higher in Turkey when the prices were higher. Low fuel oil prices are contributing to the current account deficit but also damaging the export market," Yavuz added. He stressed that if you are an economy with high production rates and you are consuming what you have produced, the current account, changes in prices or the decisions taken by the American or European central banks will not have an effect on the country's economy.

According to Yavuz, the extreme depreciation in the Turkish lira against the dollar is due to speculation and is partly eliminated by the positive impact of low fuel oil prices. However, once the current local disputes are eliminated, the dollar exchange rate will drop down below 2.80 without needing the Central Bank of the Republic of Turkey (CBRT) to increase interest rates.

SOCAR Turkey has not been affected by the recent events and local disputes, Yavuz said. On the contrary, the company secured a $1.3 billion cash flow as a result of their deal with Goldman Sachs. "There is an atmosphere that is perpetuating the idea that everything is going wrong in terms of the economy. However, our projects and investments have not been adversely affected. The deal with Goldman Sachs is an apparent example of this," Yavuz said.

Yavuz also provided information on SOCAR's current investments. So far, they have invested $2 billion in Star Refinery and 29 percent of the construction work has been completed, with the opening date scheduled for 2018. The refinery aims to decrease Turkey's imports by producing products that are used solely within Turkey, thus create savings in foreign currencies, introduce state-of-the-art technologies and manufacture products locally that are currently imported by Petkim. "You cannot support SMEs [small and medium-sized enterprises], decrease dependency on important products and grow without establishing successful key industries," Yavuz said, adding that Turkey needs to decrease its dependency on refinery goods, petrochemicals, steel and iron production so that, as a result, labor migration, supporting industries and human capital will be reversed.
RELATED TOPICS