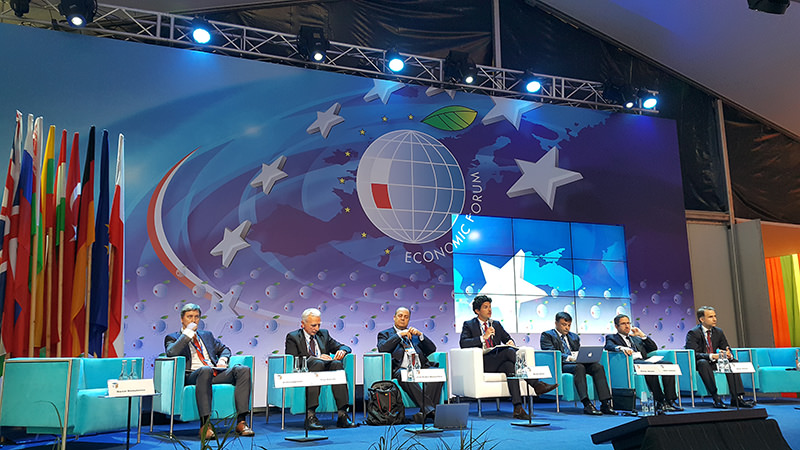 Beginning with an oil crisis, energy security has become a concept with the shale gas revolution in the United States with natural gas problems emerging from the Ukrainian crisis and Central Europe focusing on energy supply security

Energy supply security was added to the global agenda in 1973 due to the oil crises, and it has gained more importance since then as political conflicts hindered the satisfaction of growing demand. Central Europe energy experts and officials gathered in Krynica, Poland, for the 25th Economic Forum to discuss future trends in the energy sector and its influence on international politics.

The shale gas revolution in the United States and the Ukrainian crisis have increased concerns over supply security and energy policies, which became a pillar for global economies. Speaking at the panel titled "Energy as the New Security Factor" on Wednesday, Nicola Sartori, head of the International Affairs Institute's Energy Program in Italy said the concept of energy security first emerged after the 1973 oil crises and became a new concern of the European Union with the Ukrainian crisis. The EU was covering most of its energy demand, specifically natural gas, with imports from Russia, but the EU imposed economic sanctions on Russia due to political conflict over the Ukraine issue. This situation has forced the EU to find new ways to satisfy rising demand. Underlining that energy has become a geopolitical tool, Lithuanian Energy Minister Rokas Masiulus said that diversifying energy suppliers has become inevitable after the Ukrainian crisis. Stressing the importance of energy infrastructure integration between the EU countries, Masiulus said building infrastructure through Europe should be the first step for full integration, adding that connecting the countries that rely on each other should also be considered as a positive move to provide energy security.

Acknowledging the importance of the interconnectivity, Estonian Economy Ministry Undersecretary Ando Leppiman also drew attention to focusing on domestic resources to reduce energy dependency. Leppiman said Estonia has had concerns about energy security as well as maintaining a dependency on Russia since they gained independence 25 years ago. Leppiman added that Estonia reduced the amount of energy imports to 10 percent of their total energy consumption.

Polish Member of Parliament Piotr Naimski also stressed that focusing on domestic energy production to reduce energy dependency should be a priority, and said Poland will be using more of its own coal for electricity production. Underlining the importance of diversification, Naimski also added that the new liquid natural gas (LNG) terminal currently being built in Swinoujscie, Poland, would help their country reduce its dependency on Russian gas.

The last speaker of the panel was a former Spanish member of the European Parliament, Alejo Vidal-Quadras Roca, who said there are six European countries that are 100 percent dependent on Russian gas. He stressed that the EU is still vulnerable to external energy shocks. Quadras added that all EU countries consider energy security issues at a national level and highlighted the lack of efficient energy security policies at the international level.
Last Update: Sep 11, 2015 8:42 am
RELATED TOPICS