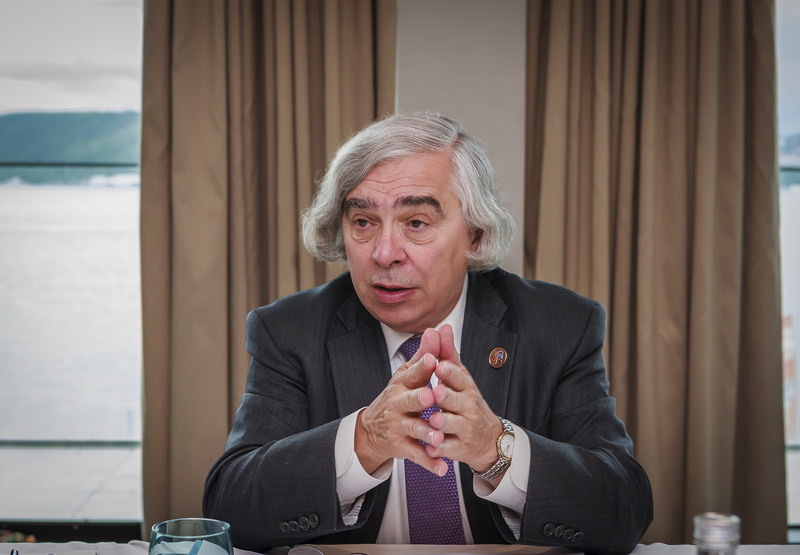 |Photo by Recai Komur
by Ali Ünal
Oct 02, 2015 12:00 am
U.S. Secretary of Energy Dr. Ernest Moniz said Turkey is already a major country for oil and gas in the region, is internally well positioned to become an energy hub and continues to develop market structure and infrastructure. Speaking exclusively to Daily Sabah during his visit to Istanbul for the G20 Energy Ministers summit, Secretary Moniz said they are interested in seeing all of their allies having diversified sources of energy supply, underlining that the first phase of the Turkish Stream project would not increase Turkey's dependency on Russian gas.

• While the U.S. supports Turkey's aim to be an energy hub in the region, the U.S. also has concerns about the Turkish Stream pipeline project, which aims to carry up to 63 billion cubic meters (bcm) of natural gas to Europe. From this point, do you think that there is a contradiction in the U.S.'s stance?

"Obviously we are interested in seeing all of our allies and friends having diversified sources of energy supply, and I understand that the first part of Turkish Stream would not increase dependency on Russian gas specifically. But we think it's really important to keep focus on the Southern Corridor for getting Caspian gas to Turkey as a hub into Europe; perhaps Eastern Mediterranean Gas is going to provide another opportunity. The real issue is obviously that the general principle of diversifying sources is really important, and the current situation in Ukraine and other eastern European countries means we think that diversifying sources with regard to Russia as a supplier remains quite critical."

• How would you evaluate Turkey's potential to become an energy hub in the region?

"Certainly Turkey is already a major country for oil and gas now. I think to go to a fully functioning hub, I might compare it to the U.S. first of all; I just want to emphasize that it`s successful for a bunch of reasons. One is it has many different supplies and many pipelines, and it is already established.

The one thing that is absolutely critical for an effective hub is transparency. So I think Turkey is internally well positioned and continuing to develop the market structure, infrastructure and diversification of the supply, which is critical."

"Yes, we have had discussions in the past. What I want to emphasize is first off all, the first LNG export cargoes will start in a few months and will be expected to build up over several years. However, whether it is Turkey or any other country, it needs to be emphasized that the U.S. government does not determine where the cargo goes, that is determined by commercial contracts, and what we would do, as the department of energy, is license companies to export to non-free trade agreement countries."

• Turkey considers Kurdistan Regional Government (KRG) oil and natural gas a vital source for its energy security and diversification. However, the U.S. has some concerns on this issue. Can you clarify the U.S.'s position about the selling of KRG oil and gas to the world market via Turkey?

"First of all, obviously having Iraq, including the KRG region, developing export oil is important to building the Iraqi economy. The only thing that we could say is that we want to see all of this is happening within Iraq's constitutional process and that obviously includes therefore Turkey working with the Iraqi government in terms of how exports are done and how the financing is done. So basically we are very supportive as long as there are discussions going on that are consistent with the Iraqi constitution."

• But the current situation is not consistent with the Iraqi constitution. As you know the KRG is already selling oil independently?

"Well, again, I think there is an understanding with Baghdad and Irbil, and it's important that Turkey carries out discussions in that way now. Obviously today, there are lots of complications in this region, and the U.S. and other coalition partners are trying to defeat ISIL [the Islamic State of Iraq and al-Sham, ISIS] and there are tremendous stresses. Now, of course, Russia's move may further complicate the whole situation around Syria, Iraq, Turkey and Iran, and so I think to get market strength ultimately this security situation also has to be solved."

• From the U.S. perspective what is the ideal scenario in selling eastern Mediterranean gas reserves to world markets? Which route (Turkey, Greece or Egypt) would be the best option to deliver these hydrocarbon reserves to the EU market?

"I think commercial considerations are going to determine that. First of all, the size of the resources still remains to be seen. Obviously there are Israeli gas fields, Cypriot gas fields, etc. But my understanding is right now there is an opportunity being pursued, particularly with Egypt and using existing LNG facilities that are underutilized in Egypt, but ultimately I think there can be many routes, and obviously, Turkey geographically is well positioned to have some of this gas go through Turkey, especially as a functioning hub.

The U.S. supports any approaches that effectively produces and monetizes the gas in the Eastern Mediterranean. As you know American companies are especially involved in Noble Energy, and we strongly support their efforts to develop and send it to market effectively. There are southern and northern opportunities, roughly speaking; Egypt and Turkey are obvious places to monetizes the gas we would support from both of those routers."

• After Iran's full return to the world energy market, do you think that Iran can be a reliable energy partner for the EU?

"As long as Iran adheres to the nuclear agreement, of course, nuclear related sanctions would not apply, and they can be a reliable partner. However, I do want to note that Iran has economic sanctions for many reasons, including supporting terrorism and other reasons, so they could always risk their position for reasons other than nuclear things like terrorism, but the expectation is that they will adhere to the nuclear agreement, and they will increase their oil export in the next few years."

• Lastly what is the U.S.'s stance on the opening of the chapter on energy in membership talks between Turkey and the European Union?

"My understanding is that we are not taking any strong position for or against a specific energy chapter. Much more relevant is what are the trade conditions, and there is a lot of interest in Europe in terms of LNG export and that it's important similarly to Turkey, as we described earlier. The real issue is going to be, in the end, to remember everything is going to be based with or without a free trade agreement situation."

In recent years, even in Europe many LNG cargos that were contracted to go to Europe were actually resold in Asia because of the price differential. I think the question really is having the commercial market to receive the gas.