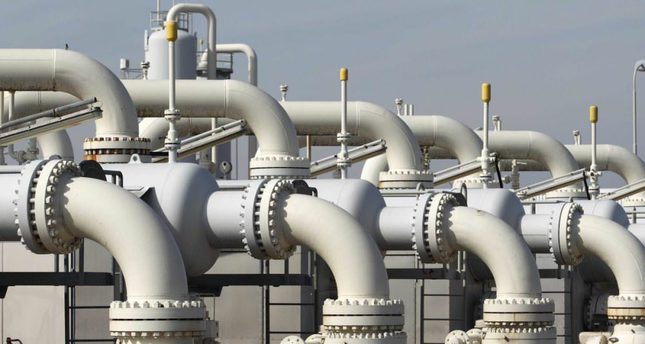 by Daily Sabah with AA Oct 12, 2015 12:00 am
The Energy and Natural Resources Ministry denied allegations that Russia has declined Turkey's request for an additional 3 billion cubic meters of natural gas through the Blue Stream Pipeline, deeming the reports to be "unfounded and groundless claims."According to a written statement from the ministry, the natural gas purchase agreement for 16 billion cubic meters through the Blue Stream Pipeline with Russia is still valid and Turkey continues to receive 35 million to 47 million cubic meters of natural gas on a daily basis depending on demand without any problems. The ministry also said additional gas purchases through the current Blue Stream Pipeline were discussed with Russia as part of the routine process, and as a result it was determined that the capacity could be increased by 1 billion cubic meters through improvements to take place at the Durusu Natural Gas Delivery Station, which commenced in 2014 and are still ongoing. After this capacity increase, Russia could provide the additional natural gas to Turkey depending on the contracts to be signed by either the public or the private sector.

The announcement also said the improvements required to be performed at the Russian stations by Russian authorities would increase the current capacity of the pipeline and that once such improvements, expected to be completed approximately within three years, are completed, another additional 2 billion cubic meters could also be transferred to Turkey. These improvements were included on the agenda of the recent discussions between Russia and Turkey and currently Turkey continues to receive natural gas from Russia through the Western Stream and Blue Stream Pipelines, according to the contracts in force.

The announcement condemned claims that Russia had declined Turkey's request for an additional 3 billion cubic meters of natural gas and added that Turkey is a reliable and important market for Russia and Russia is a reliable and important supplier for Turkey. "Diversifying our natural gas suppliers and ensuring safety of supply is one of our priorities as the ministry. In this respect, our close relations with current and potential natural gas suppliers including Russia remain intact. Our ministry has taken all precautions to prevent any kind of problem in the natural gas supply," the announcement said.
RELATED TOPICS