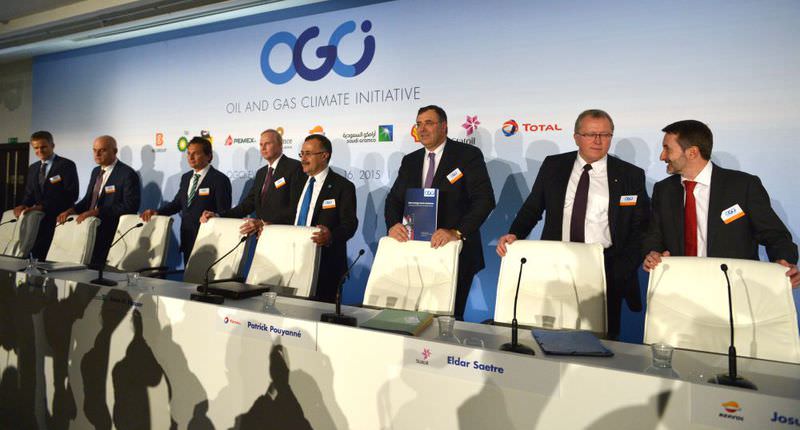 by reuters
Oct 17, 2015 12:00 am
Oil and gas industry bosses pledged on Friday to curb gas flaring as they sought to boost their image in the climate change debate ahead of a United Nations summit later this year, but disagreed on putting a price on carbon emissions.

The leaders of 10 companies that produce 20 percent of the world's oil and gas recognised that current greenhouse gas levels were inconsistent with a goal of limiting global warming to 2 degrees Celsius over pre-industrial times, but stopped short of outlining goals to cut their own emissions.

The executives of eight companies held an unprecedented joint press conference in Paris, calling for an "effective" agreement at the U.N. summit in December, where negotiators from almost 200 nations will meet to try to forge a global climate change agreement.

While promising to collaborate on limiting gas flaring at refineries, they failed to find common ground on a mechanism for carbon pricing, which leaders of seven European companies adhered to earlier this year, saying it will encourage the private sector to use cleaner sources of energy and to develop new technologies such as carbon capture and storage (CCS). "We have international oil companies and national oil companies and some of the nations have a different view on carbon pricing as a group," BP chief executive officer Bob Dudley said. "We actually think this is the route that will allow us to allocate our capital and make our investments. It isn't written in the report because we wanted to bring a group together committed to many of the other broader goals out there."

Officials who attended the leaders' discussions ahead of the press conference said the heads of the national oil companies of Saudi Aramco and Mexico as well of India's Reliance Industries preferred not to include a reference to carbon pricing.

The rift will amplify an already deep divide between Europe's Total, BP, BG Group, Eni, Statoil and Repsol and their U.S. peers including Exxon Mobil and Chevron who stayed away from the initiative.

For many of the companies, this is a fight for the future of the oil and gas sector in the public debate as a rising number of organisations and politicians call for minimising the use of fossil fuels in favour of renewable energy such as wind and solar power. "Sometimes in all these discussions you have the impression that all fossil fuels are the bad guys. But the bad guys are part of the solution," Pouyanne told a gas and electricity summit in Paris on Thursday.

"Whatever people think, we still need fossil fuels. We need to make advocacy for gas. We need to explain to our policy makers that gas has to be encouraged," Pouyanne said. "Policy makers are not convinced in many countries that gas is part of the solution for climate change, we in the industry need to speak up."

The executives again urged governments to ditch coal in favour of less polluting natural gas, which emits around half of the CO2 coal does, in power plants and heavy industry. Total chief executive Patrick Pouyanne said that a major Chinese oil and gas company he would not name will join the group by the end of the year. BG Group's chief executive Helge Lund said that he hoped further companies would join to form a "critical mass to have a more visible position for solving the climate issue." Diplomats gather in Bonn from Monday for the last formal session ahead of the Paris climate talks in December.

The International Energy Agency forecasts oil will remain the largest energy source by 2040, although its share will decline while renewable sources of energy will grow. All major emitting countries have now submitted plans to the United Nations detailing how much they plan to curb their emissions. For oil executives, pledges by key oil consuming countries including China and India to cut fossil fuel consumption have crystallised their need to act. The World Bank estimates around 300 million tonnes of carbon dioxide (CO2) is emitted from gas flaring each year, equivalent to around 77 million cars. Critics say however that without clear goals to cut their emissions, oil companies' efforts would have little impact. Charlie Kronick of environmental campaign group Greenpeace said: "Their latest intervention contains nothing meaningful that will significantly aid the decarbonisation of the global economy."