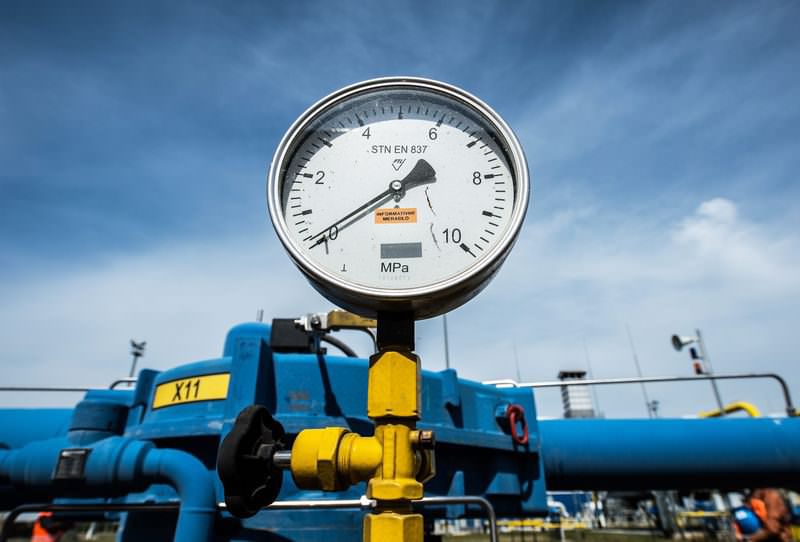 A pressure gauge at gas compressor station in the eastern Slovak town of Velke Kapusany, near the border with Ukraine, Slovakia, 02 September 2014. (EPA Photo)
by daily sabah
Nov 10, 2015 12:00 am
After drastically cutting its intake of Russian gas to 10 million cubic meters a day -about a fourth of the previous month,- Ukraine seems to be struggling with its Naftogaz financial deficit as warnings have been sound that the current pace of consumption could mean that the Eastern European country would be out of gas in four days.

Gazprom CEO Alexey Miller said on Tuesday that Ukraine's prepaid gas would only be enough for four days, until Saturday November 14.

Since the beginning of November, Ukraine has decreased its Russian gas consumption as well as its purchases of natural gas from Europe, Miller noted, adding that Ukraine had only paid for a five-day supply.

Miller had stated on November 5 that Naftogaz's $24 million worth of prepayment would only suffice until November 10.

Ukraine in July had stopped purchasing gas from Gazprom, it's biggest foreign supplier, after Naftogaz and Gazprom couldn't come to an agreement on pre-payments.

In September Ukraine had requested 2 billion cubic meters of gas for the October-March period.

Eventually, gas supplies between Kiev and Moscow resumed on October 12 after Gazprom received $234 million out of a total of $500 million expected in pre-payment for October gas deliveries.

The rest of the payment was made on October 20 and end-October with $136 million, and $64 million respectively.

Gazprom accounts for around a third of Europe's gas needs and typically about half of that is pumped via Ukraine, which has had several disputes with Moscow over prices in the past decade.