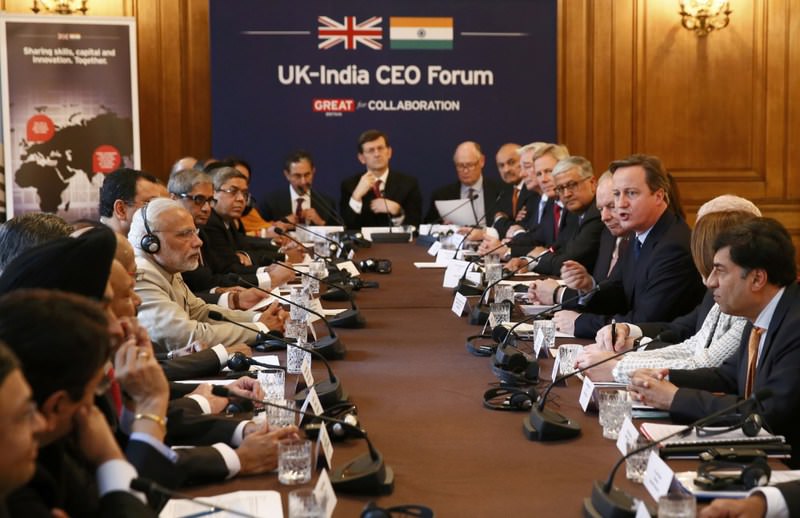 by daily sabah
Nov 14, 2015 12:00 am
India and the U.K. signed a civil nuclear agreement with a view to work together and combine their forces in defense and cyber security, as announced by Indian Prime Minister Narenda Modi and U.K. Prime Minister Davis Cameron on Thursday. Also, during Modi's U.K. visit, collaboration between the U.K. and India is said to have resulted in business deals worth at least 9 billion pounds.

In a news conference, Cameron said, "We want to forge a more ambitious, modern partnership," underlining that both countries are willing to support each other in strategic and commercial issues. To back this, Modi added, "As far as India is concerned, if there is an entry point to the European Union, that is the UK." To summarize the significance of the nuclear pact, Modi said, "The conclusion of the civil nuclear agreement is a symbol of our mutual trust and our resolve to combat climate change," adding, "The agreement for cooperation in India's Global Center for Clean Energy Partnerships will strengthen safety and security in the global nuclear industry." In addition, Modi commented further on the defense and security deals signed, saying, "The U.K. will also be a strong partner in India's defense modernization plans, including our Make in India mission in defense sector." To foster their relations further on a political and economic scale, both sides agreed to contribute to developments in other parts of the world. Therefore, Cameron emphasized that it is crucial that India is a permanent member of the U.N. Security Council and an active member in international export control regimes.

Moreover, to support this long term collaboration, along with defense and security issues, Cameron also stressed the U.K.'s support for India to ameliorate its infrastructure and education. Also, to strengthen economic ties, Cameron said, "We want to become your number one partner for supporting the finance needed for (Modi's) ambitious plan, making London the world's center for offshore rupee trading with the issue of over 1 billion pounds in bonds, including the first government-backed rupee denominated bond." He also reemphasized the value of recent steps taken for further collaboration, saying, "During this visit, British and Indian companies are announcing new collaborations together worth more than 9 billion pounds."