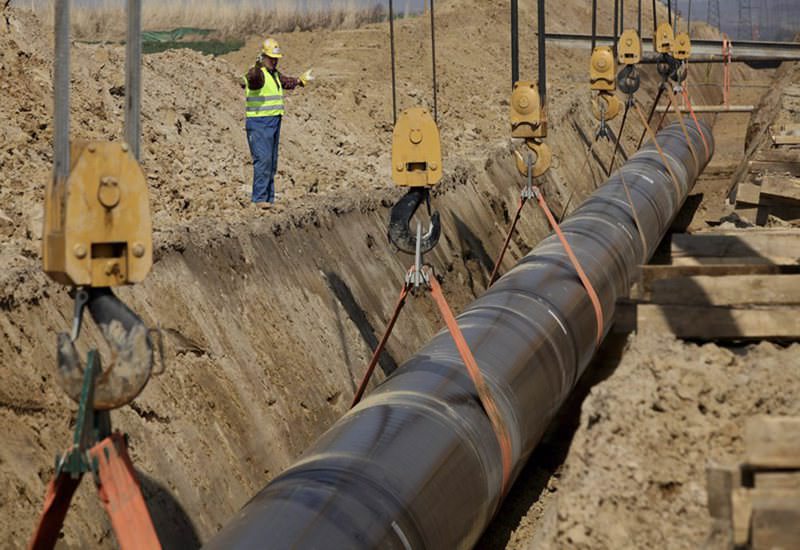 by Daily Sabah with AA Nov 14, 2015 12:00 am
Russia's Nord Stream-2 Natural Gas Pipeline Project is progressing despite objections from the European Union. The contract for the project - construction of two separate underwater pipelines with a 55-billion-square-meter capacity in the Baltic Sea - had been concluded and signed between Russian energy company Gazprom, Germany energy companies E.ON and BASF and Austria-based energy company OMV in September. However, Easter European countries, including Poland, Slovenia and Ukraine do not want to be deprived of the transit fees they charge, approximately $3 billion a year, from pipelines Russia used to deliver natural gas to Europe.

Speaking to Anadolu Agency, Russian National Economy Academy Assistant Chairman of Economic Regulations Faculty Ivan Kapitonov said that despite the high cost, estimated to be around $10 billion, Russia is intent on the project, as it cannot reach its targeted export markets in the Asia-Pacific. Kapitonov said that the project could only be realized with the support of Germany, which backs the project, as Russian natural gas will be distributed to Europe over German ground despite the EU objections.As Russia experienced various cuts in the p

ipelines in Northern Europe, it wants to build a more reliable infrastructure, and to implement the project Russia expected that the price of natural gas would be determined by the spot market, as proposed by the EU. While current natural gas prices do not render the project highly profitable for Russia, as prices are expected to increase by the end of 2016, the project would then become profitable for Russia. Center for European Politics energy analyst Christian Egenhofer claimed that Russia's bypassing of Ukraine for natural gas exports to Europe conflicts with the interests of the EU. Pointing out that many countries in Europe object to the project, Egenhofer said that as Russia will be assuming all the risks regarding the project, European companies would benefit.

The author of "Beyond Crimea," Agnia Grigas, said Russia does not want to use the pipelines in Ukraine to prevent the risk of facing the crisis that occurred in 2006 and 2009 between Russia and Ukraine. Further, according to Grigss, Europe is not keen on the project due to the new Third Energy Package; however, as countries like Germany would have easier access to Russian natural gas, they'll continue to support the Nord Stream-2 Project.

European Energy and Resources Security Center Research Manager Frank Umbach also deemed the project as part of the Russian strategy to bypass Ukraine, while expanding Nord Stream. "Neither the E.U.'s natural gas dependency will decrease with this project nor will prices be cheaper than the prices of natural gas delivered through Russia. While $43 is paid per cubic meter of gas Gazprom provides through Nord Stream, this amount drops to $33 if the gas passes via pipelines in Ukraine," said Umbach. He further warned that if the E.U. withdraws from the Ukrainian natural gas delivery system, the energy security of Europe would be jeopardized, and this would damage Slovakia, Hungary and Russia, in particular.

Umbach underlined that Russia is inclining towards unnecessary and expensive gas lines just to avoid Ukraine and that such a stance damages Ukraine's efforts to integrate with the European energy and gas markets. While Kiev earned around $3 billion from natural gas transition and pipelines of Russian gas in 2014, this figure is estimated to be around $2 billion in 2015.

Umbach added that after successful completion of Nord Stream 3-4, western companies would prevent investments to modernize Ukraine's natural gas network. The European Commission is supporting the modernization of Ukraine's network by the international consortium according to Umbach.

Energy consultant Jeffrey Michale also said that Russia is taking steps to improve Nord Stream by relying on Germany's support, as Germany's natural gas demand is increasing, and there are projects for producing electricity from natural gas in the southern regions of Germany.

The senior economist for Rand, a U.S-based think tank, Keith Crane, argued that Nord Stream's expansion was not due to increasing demand. Technically, Russia delivering gas through pipelines in Ukraine would be much cheaper; yet, Russia's main aim is to eliminate paying transit fees to Ukraine, as the cost of Nord Stream is much higher than transit costs in Ukraine.
RELATED TOPICS