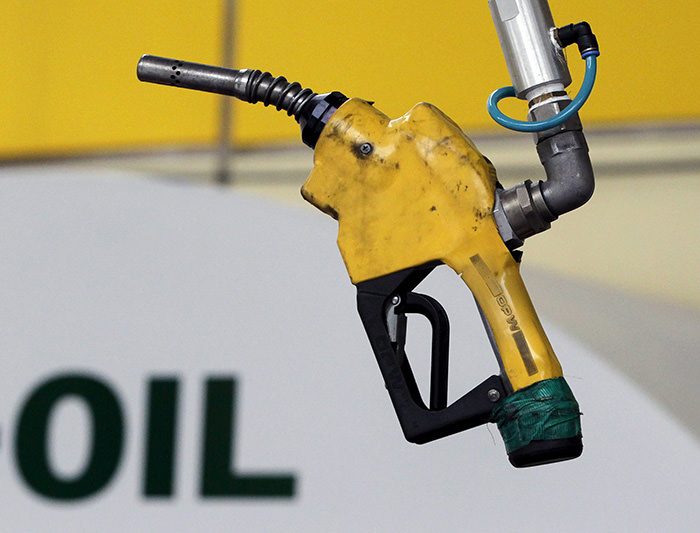 |Reuters Photo
by Anadolu Agency Nov 23, 2015 12:00 am
The price of Brent oil held steady at about $43 per barrel yesterday; however, the bearish outlook remains strong in the oil market with the slowdown in the Chinese economy and concerns over the glut of crude supply, an analyst told Anadolu Agency. The price of the global benchmark Brent crude oil opened at $44.36 per barrel, but fell to $43.70 a barrel around 9:30 a.m. in Turkey, nearly the lowest price seen in seven years.

Last week, the price of Brent crude fluctuated between $43-$45 per barrel.

Goldman Sachs analyst Michele Della Vigna told the Today program on BBC's Radio 4 yesterday that oil could fall to as little as $20 per barrel. But, he said, there is only a 15 percent probability that this might happen, nor did he expect this extremely low price level to last for a long period.

The economic slowdown in China, the world's second-largest economy, and one of the most important importers of crude oil in the world, is one factor making demand slack. However, Julian Evans-Pritchard, an economist at Capital Economics Singapore, told Anadolu Agency that the volume of oil imports has risen in China, as refineries are taking advantage of low prices to stockpile the commodity. With that increase in quantity, China's oil imports are down significantly in dollar terms, Evans-Pritchard said.

However, the slowdown in the Chinese economy is forecasted to continue in the long term, Evans-Pritchard said. Meanwhile, crude oil inventories in the U.S. increased for an eighth straight week, the U.S.'s Energy Information Administration said last Wednesday.

Although the increase in U.S. crude stocks was smaller last week, compared with that of previous weeks, the large amount of stock, which stands at 487.3 million barrels, is another factor contributing to the low price of oil. Thomas Pugh, a commodities economist at London-based Capital Economics, said he remains hopeful that demand will pick up. "Demand is growing strongly and inputs to refineries are also rising again which should help to eat away at the surplus oil in the market," he explained in his U.S. Weekly Petroleum Status Report last Wednesday.

Another factor that could push oil prices higher is the drop in the number of oil rigs in the U.S. last week. Data from oilfield services company Baker Hughes last Friday showed that the number of U.S. oil rigs, which provides an indication about the well-being of the oil sector in the country, fell once again.

The oil rig count in the U.S. has declined in the 11 weeks of the past three months, while the total number of oil rigs in the U.S. has fallen by 64 percent since October 2014, when the rig count was at its highest level with 1,609.

U.S. oil producers are waiting for prices to pick up in order to add more rigs. Domestic oil output in the U.S. has fallen by 500,000 barrels per day (bpd) on average since April this year, when production peaked at 9.6 million bpd.

Oil production from OPEC countries continues to add to the glut of supply in the market.

The oil industry awaits the biannual meeting of the cartel that will be held in Vienna on Dec. 4. In its last two meetings, OPEC refused to cut production in order to raise falling oil prices. There are still no signs from Saudi Arabia, Kuwait and the United Arab Emirates of any intention of reducing output. These producers have made it clear that they feel reducing output would lead to a loss in market share. In addition, Iran is preparing to return to the oil market, expecting sanctions on the country to be lifted sometime early next year. Tehran has repeatedly said it will increase its oil output by 500,000 bpd immediately after the sanctions are lifted and by another 500,000 bpd within the following six months. This could increase the glut of supply in the oil market, and pressure oil prices even lower.
Last Update: Nov 23, 2015 4:37 pm
RELATED TOPICS