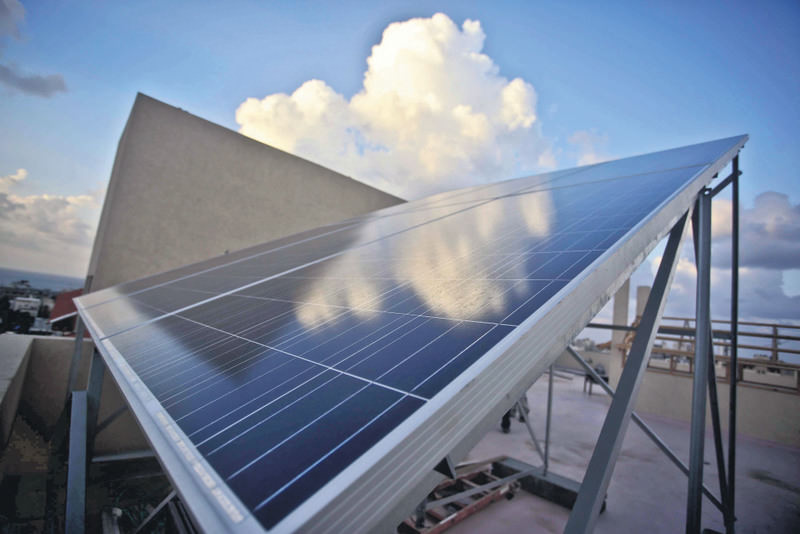 by Anadolu Agency Nov 25, 2015 12:00 am
Imad Hussein, a merchant in the blockaded Gaza Strip, inspects the solar panels before installing them on the roof of a house in Gaza City. The panels, he says, should be enough to provide the house with electricity day and night.

According to Hussein, the owner of a company that sells and installs the panels, the energy crisis that has plagued the Gaza Strip since 2006 - when Israel first imposed a crippling blockade on the territory - has forced many residents to resort to solar energy.

"Many families and associations in Gaza have recently turned to solar power to meet their daily electricity needs," Hussein told Anadolu Agency. Solar panels, which absorb sunlight, are installed on the roofs of houses and buildings, Hussein explained. These panels charge batteries that in turn produce electricity for domestic use.

"The solar cells [on the panels] absorb the sunlight and convert it into electrons, which are transferred by wires to the batteries," he said. "The energy that accumulates in the batteries is then converted to electrical transformers, which produce a consistent electric current," Hussein added. He went on to point out that installation costs depended on the number of panels needed. Six panels, for example, which are enough to provide a single apartment with all its electricity needs, cost some $3,000.

"It's true they're expensive, but they're in high demand," Hussein said, noting that his company had recently installed panels for dozens of homes, institutions and hospitals in Gaza. He added: "Frequent electricity cuts have forced Gaza residents to search for alternatives, despite the high cost involved."

The Gaza Strip, where some 1.9 million people live within 360 square kilometers of land, has groaned under a chronic energy crisis since Israel first sealed its borders with the Palestinian enclave in 2006 (with Egypt following suit in 2007).

Ibrahim al-Mashharawi, whose father recently had solar panels installed on the roof of their Gaza home, told Anadolu Agency that he felt "very comfortable" now that he enjoyed access to regular electricity.

"Now we can operate electronic devices throughout the day without worrying about the next power outage," he said. "We no longer need to rely on candles or dangerous generators." Mohamed Hamadeh, the owner of a furniture company in Gaza, also recently converted his home to solar power.

"Now the devices in my home - the refrigerator, washing machine and other appliances - all run on solar energy," he said. Hamada went on to lament, however, that solar power was a luxury that only Gaza's relatively well-off could afford.

"There's a high demand for solar panels, but mostly among high and middle-income people," he said, adding that Gaza's limited-income inhabitants should also enjoy the benefits of solar power. In May, the World Bank reported that the Gaza Strip's unemployment rate had reached a whopping 43 percent - the highest in the world. "Nearly 80 percent of the strip's residents receive social security benefits and 40 percent of them are still languishing below the poverty line," the bank noted. The Gaza Strip requires 400 megawatts of electricity - of which only 200 are currently available - to meet the needs of its residents.
Last Update: Nov 25, 2015 1:13 am
RELATED TOPICS