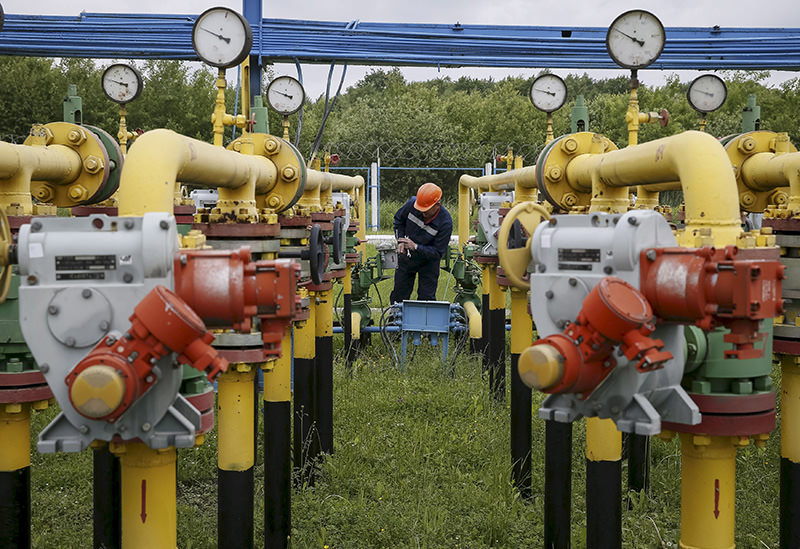 by Dec 01, 2015 12:00 am
Russia may freeze work on the Turkish Stream gas pipeline project for several years in retaliation against Ankara for the shooting down of a Russian air force jet, two sources at Russian gas giant Gazprom told Reuters.

The Kremlin has imposed trade sanctions on Turkey over the jet incident last week but so far the measures have not affected the Russian energy exports to Turkey that are the core of their economic relationship.

Freezing work on the pipeline - intended to pump Russian gas, via Turkey, into southeastern Europe while bypassing Ukraine - would have a more symbolic than practical effect because the project is already beset by delays and doubts over its viability.

Any freeze would also not affect another Russian project to boost gas exports to the north of Europe. Gazprom is going ahead with plans to expand the Nord Stream pipeline to Germany despite resistance from several ex-communist states in eastern Europe.

Gazprom sources said no decision had been taken inside the company about changes to the Turkish Stream schedule in response to the row with Ankara, but said they were awaiting instructions from President Vladimir Putin.

"We're expecting that the head of state, in all likelihood, could declare a freezing of Turkish Stream, or at least some kind of timeout should be announced," said one Gazprom source, who spoke on condition of anonymity.
Russian Economy Minister Alexei Ulyukaev, on the other hand, said on Tuesday that Russia has not yet taken a decision on financing for the Turkish Stream gas and a nuclear power plant due to be built in Turkey and is working on the basis that they will go ahead

"The government has not frozen these projects," Ulyukaev told a news conference after tripartite talks over a planned EU-Ukraine trade deal.

"There have been no decisions at this stage on suspending, freezing or ending financing for these projects so we are working on the assumptions that they will be carried out."

A second source in Gazprom, who also did not want to be identified, said: "We are still hoping that Turkish Stream will be pushed back by a few years, rather than completely cancelled."

Russian Economy Minister Alexei Ulyukayev said last month Turkish Stream could be among the projects affected by sanctions against Turkey, but he did not specify how.

Gazprom is pursuing a strategy of diversifying the routes by which it supplies gas to Europe - its biggest export market - so that less of the gas passes through Ukraine.

In the past, rows between Moscow and Kiev have disrupted transit flows through Ukraine to the European Union. Russia's annexation of Crimea last year and a rebellion by pro-Moscow separatists in eastern Ukraine have made the relations more fraught, and added urgency to the search for an alternative.

The project is to involve, initially, building a new gas pipeline under the Black Sea to Turkey, and in subsequent phases the construction of a further line from Turkey to Greece, and then overland into southeastern Europe.

Even before the row with Ankara, the project had been delayed and reduced in scale, leading some industry insiders to doubt if it would ever happen. In October, the completion date for the first phase was pushed back from 2016 to 2017.

Russia abandoned a previous attempt to build a new route to southern Europe after Bulgaria, where the pipeline was to have made landfall, pulled out under pressure from Brussels.

In September, a group of European companies signed an agreement with Gazprom to expand its Nord Stream pipeline so that it can deliver increased volumes directly from Russia to Germany, also without pumping them through Ukraine.

Gazprom, E.ON, BASF /Wintershall , OMV, ENGIE and Royal Dutch Shell form the new consortium for the project, which is called Nord Stream II and aims to double the route's annual capacity to about 100 billion cubic metres of gas.

The new pipelines are due to start transporting gas by the end of 2019, according to the consortium.

The plan has met opposition from the U.S. government and some eastern European countries, which say it allows the Kremlin to squeeze Ukraine out from its role as a transit country.

Ten EU countries have written a letter to the European Commission saying that Nord Stream II runs counter to the bloc's interests.

"There is a broad agreement within EU countries ... that building Nord Stream II stands against the idea of diversification and the idea of the internal market and would lead to an increase of energy supplies from one direction and one supplier," Grobarczyk said.

Hungary, a country which backed the aborted South Stream project, has accused the EU of exercising double standards over which pipeline routes it supports and which it opposes.

"They complained about South Stream because it would have bypassed Ukraine. Does Nord Stream II traverse Ukraine?", Hungarian Foreign Minister Peter Szijjarto said on Nov. 20. "Interestingly, South Stream was problematic, while Nord Stream is not."