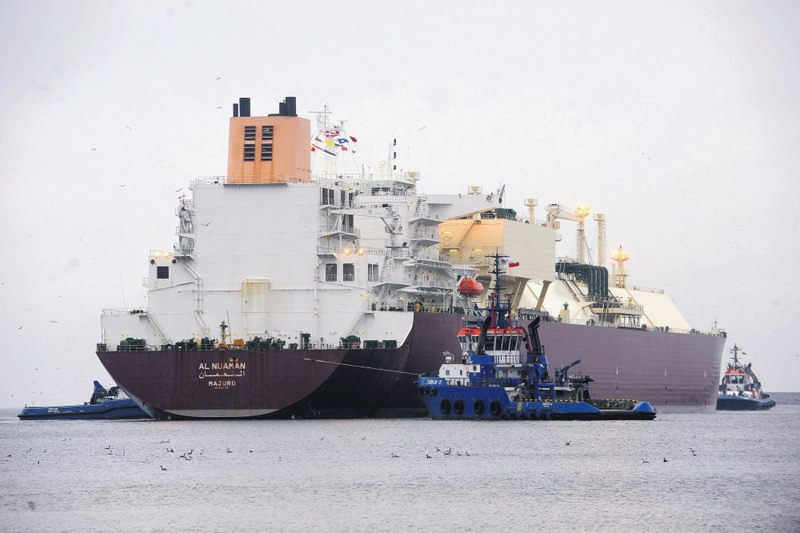 by Anadolu Agency Dec 16, 2015 12:00 am
As natural gas supply security has been diminishing lately, Turkey might increase its variety of resources by chartering a "floating LNG [liquefied natural gas] storage ship" in the short-term. Potential investors are now waiting for the signal of the government. According to information obtained by Anadolu Agency (AA), there are 18 floating LNG terminals defined as "floating storage and regasification" units (FSRU ships) in 11 different countries in the world, and they can be commissioned within nine to 10 months. Experts highlight that one FSRU's capacity may vary between 500 million and 1 billion cubic meters of gas, while the cost ranges between $200 million and $1 billion depending on the capacity.

Boğaziçi Energy Club Chairman Mehmet Öğütçü said these ships offer flexibility and mobility, and added that they can be used wherever they are needed - for example, whether in the Marmara region or the Mediterranean - yet investors are currently waiting for the government to take a step. "There is a solid example in this respect. Jordan signed a five-year deal and suddenly decreased its dependency on natural gas, which created crucial flexibility in the security of supply in the region," Öğütçü said.

Öğütçü further stressed that Israel also wants to implement a similar project, and added that deals are usually made for five-years to enable easier funding for the investors. However, he emphasized the importance of establishing the share and place of LNG in the natural gas replenishment process, as these investments would become idle if LNG resources will not be used after the amount of natural gas received from pipelines increases. He also said certain large companies in Turkey previously wanted to take steps in this regard, but the lack of regulation was an obstacle they faced. "In order for investments to be made in this respect, the related legal regulations should be put into force," Öğütçü added.

According to Öğütçü, Turkey's national oil company, BOTAŞ, is already in negotiations with certain firms to deploy these ships. However, experts highlight the importance of the legal process regarding these ships, which offer quick installation and commissioning with low costs, which is now being examined.

LNG market experts also note that if these units are positioned in the Southern Marmara or Bandırma regions, they can meet the energy demand in the energy plants in the region as well as the high-energy demand in Istanbul. It is further claimed that if these ships can be commissioned until gas starts flowing through the Trans-Anatolian Natural Gas Pipeline (TANAP) and from Northern Iraq, supply security can be accomplished in the short-term in Turkey. Moreover, if there are any cuts to current resources, these additional LNG terminals and storage ships will be an alternative to cover the increased energy demand in winter months.
RELATED TOPICS